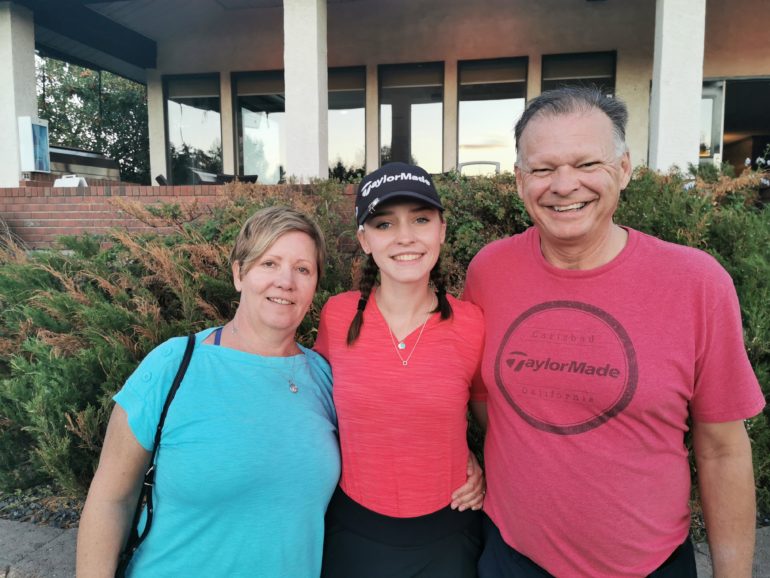 We had another ‘first-time’ event on Saturday, as the McLennan Ross Alberta Junior Tour made its inaugural visit to Woodside Golf Club in Airdrie.  Judging from the well-organized event hosted by Head Professional Cam Latimer and his team and the season-high throng of 84 juniors from across the province, including 23 junior girls,  this likely won’t be our last visit to Airdrie!

Aneesh Kaura of PInebrook got into the tournament as a last-minute replacement from the waiting list and he made the most of his opportunity.  Filling in a slot with three junior girls as playing partners (lucky you, Aneesh!) , he sprinkled in five birdies on his card offset by a long bogey to post a Tour season-low 4-under par 66 to take home the overall Low Gross title.

Patrick McLarty of Carnmoney, 13, had an excellent result of his own, firing a 3-under par 67 to capture his flight of younger players who competed from a shorter set of tees, but this was an outstanding result for this up-and-comer and it earned him a spot in next Friday’s Tour Championship in the process.  Kaura also snagged a spot along with Christian Hansen (73) of River’s Edge GC in Okotoks. Cole Phillips of Willow Park (73) was tops among the boys born in 2006-07. Seth Marriott of Lacombe also toured the course in 73 shots, but he was already in the field for Wolf Creek.

IMPORTANT – Ryker, Jalen, Chase and Cole – you were all gone by the time I was able to finally sort out who all the Wild Card qualifiers are,  but you’re IN…go to www.albertagolfjuniors.org, download the Entry Form for the Tour Championship link for Wolf Creek, and get that off to Wolf Creek ASAP if you want to play next Friday.  Reminder that the entry deadline is NOON on Wednesday.  The Wolf Creek link also has the Information Letter for you about all the details of the event.  Congrat’s to all the qualifiers.

In the Junior Girls’ division, we had another great turnout of 23 players!  The boom in junior golf this summer, for whatever reasons you can think of, has really manifested itself in the fantastic increase in junior girls’ entries. Many of these kids are very young and just getting their first taste of tournament competition, but we all have to start somewhere and based on the talent on display and the enthusiasm of these young players, I have no doubt that many of these kids will rapidly move up the competition ladder in junior golf in our province very soon.

Two junior girls shot 80 today and tied for  Overall Low Gross.  Emily Cornwall of Springbank Links captured her age group (2001-2003) as did Tessa Ion of Pinebrook in the flight for girls born in 2006-07.  Both earned their ticket to Wolf Creek next Friday, along with Olivia Johnson (82) of Silver Springs from the flight for girls born in 2008 & later.

Emily Cornwall (C) of Springbank Links with her parents.

Olivia, Tessa, Sydney and Taylor, if you’re reading this on Sunday, you’re in the same boat as those boys listed above that also had to leave before we were able to finalize all the qualifiers.  Follow the instructions above and get your entry off to Wolf Creek. Due to the large number of girls entered today and overall for the year,  we awarded three bonus Wild Card spots, which went to Cici Zhang (88) of Lynx Ridge, Sydney Chuong (86) of The Winston, and Taylor Foord (87) of Woodside

The Tour heads east on Monday to Desert Blume in Medicine Hat and then back to Nanton on Tuesday for the final ‘regular season’ event of the 2020 Tour schedule before the Tour Championship coming up this Friday at Wolf Creek.

These scores are across all age groups.  Boys of different ages played different sets of tees but for this listing, we have just shown all the gross scores.

( for the Order of Merit listing, I have lumped all these boys in one group, even though the boys born in 2008 & later played shorter tees.)

Thanks again to Head Professional Cam Latimer and his team at Woodside for putting on a terrific tournament on Saturday.