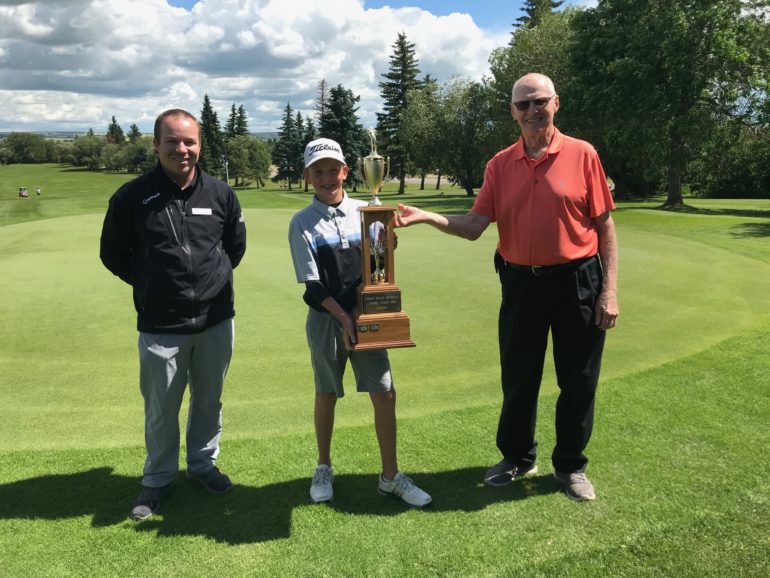 At the first McLennan Ross Alberta Junior Tour event of the season two weeks ago in Innisfail, 13-year-oid Ryan Garbutt of Windermere GCC fired the day’s low gross score of 78, but it was achieved from a shorter set of tee markers for his age group than what was used by the two older age groups of boys.  Sebastian Berube of Priddis Greens came in with a 79 that afternoon from the whites, so it was somewhat unsettled as to who really ‘won’ the Innisfail event.

Today, that matter was crystal clear as all the junior boys on hand in a sold-out field of 50 players competed from the same set of tees, set at slightly over 6,000 yards over the hilly fairways and small, slick greens at the Lacombe GCC. Very windy conditions made low scoring extremely difficult and Garbutt’s 79 was the only score of the day under 80. Spencer Florchuk of Ft. Saskatchewan was a single shot back at 80, with three players T3 on 81, including Danny Humbke and Seth Marriott of the host club, and Tyler Michaels of Broadmoor. Micheals was paired with Garbutt in the flight for boys born in 2006 and later.  Garbutt becomes only one of a handful of players aged 13 and under who have won a McLennan Ross Alberta Junior Tour event outright in the Tour’s 25-year history. 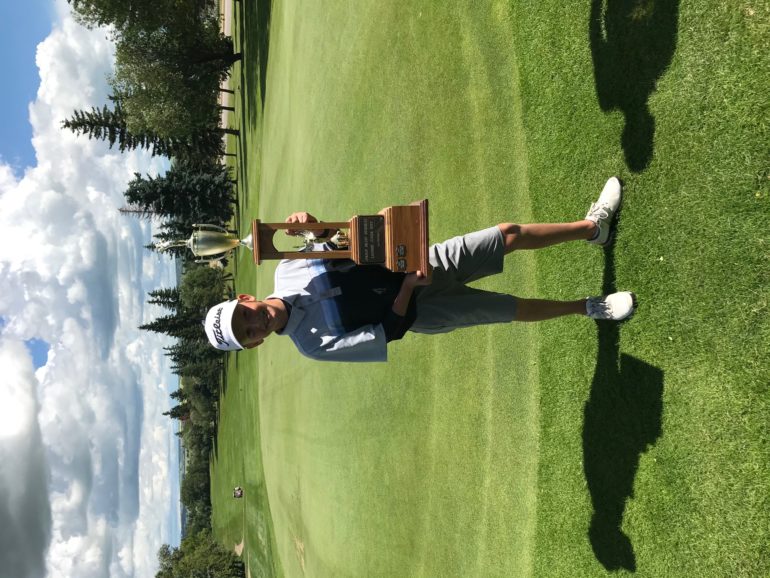 Some of the other players who have achieved such early success include Andrew Harrison of Camrose, who won both the Alberta Amateur AND the Alberta Open Championship last year, and Wil Bateman of Blackhawk, who won a professional event this winter in Arizona and is one of the leading contenders for the 2020 Alberta Open Championship coming up later this month on The Links Course at Wolf Creek Golf Resort.  Bateman remains the youngest winner in McLennan Ross Tour history after he won the Goose Hummock event, shooting a smooth 73 as an 11-year-old!

An added sideline is that young Tyler Michaels is the son of Oilers play-by-play broadcaster Jack Michaels, who can now freely chirp his colour man Bob Stauffer that “My 14-year-old can kick your butt” on the golf course.

The Lacombe event this morning was the fourth in a row this spring that sold out their available spots, as junior golf interest in Alberta is going through the roof.  Adding to the excitement is that both the Olds event this Wednesday and next Monday’s tournament at RedTail Landing in Nisku have both already hung out the “Sold Out” sign.  We also learned today that the tournament on July 28th at Collicutt Siding GC in Crossfield is also full!  Check the Tour schedule on the Alberta Golf website at www.albertagolfjuniors.org for the events coming up the rest of the summer leading up to the 25th annual Tour Championship at Wolf Creek Golf Resort.

UP NEXT ON TOUR: