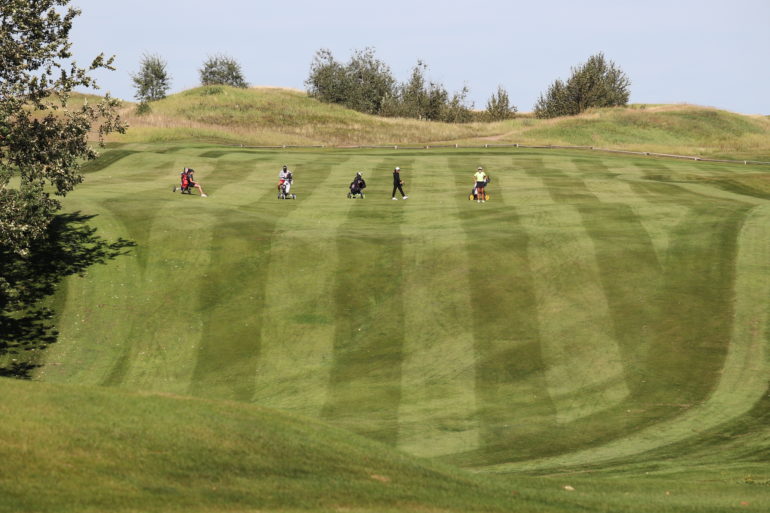 Yesterday was the Silver Anniversary Tour Championship for the McLennan Ross Alberta Junior Tour, but when 124 juniors from across the province had completed play at Wolf Creek Golf Resort, the day and the entire 2020 season felt like a golden moment.

Six months ago, who could have predicted how the golf industry as a whole and junior golf in particular would have experienced such a resurgence? From days back in March and April when we weren’t even sure we would HAVE a golf season in Alberta this year, the industry has enjoyed its best season in a decade or more.  Families and kids have been flocking to golf courses everywhere, and the McLennan Ross Alberta Junior Tour rolled out a series of 22 tournaments all over Alberta so that young players could help sharpen their games with excellent competition on outstanding golf courses.

Facilities had to adjust how they presented themselves to players, and Alberta Golf as tournament organizers had to adjust how we could help run successful events while doing our utmost to keep participants safe. After a very busy summer, with sold out fields the order of the day tournament after tournament,  I would like to think that things turned out pretty well.

Wolf Creek Golf Resort  has been the host site for the Tour Championship since the Tour’s inception in 1996. 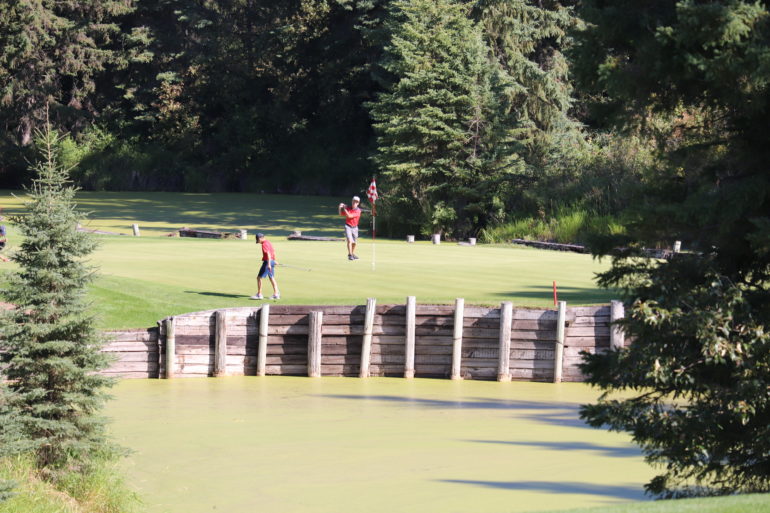 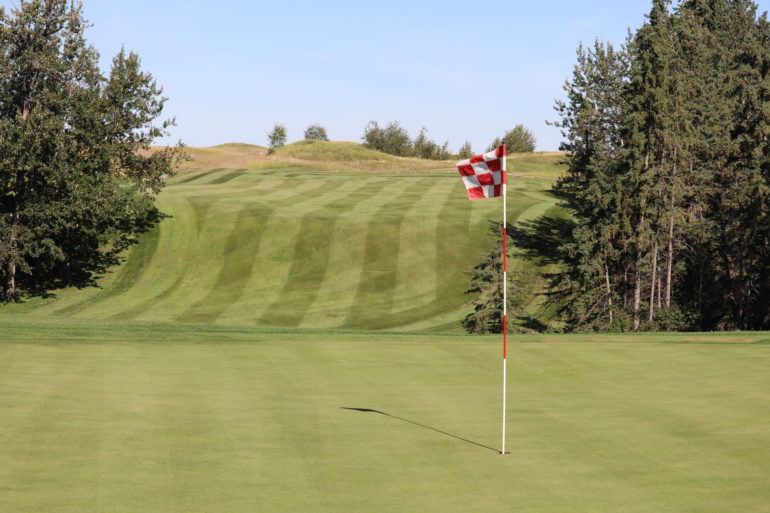 Owner Ryan Vold was a co-founder of the Tour, and even though Alberta Golf now operates the Tour, Ryan’s dedication and support of junior golf in Alberta remains unchanged. Thousands of junior golfers have earned their right to compete at the season-ending event over the last 25 years, and the Tour Championship trophy has many very well known names engraved on its face.  Jaclyn Lee, Tyler Saunders, Jennifer Ha, Ryan Swelin, and many more.  We have two more names to add to the trophy today, but only one new one.

Jayla Kucy of Camrose became the first three-time winner of the Tour Championship, as she completed her three-in-a-row streak of championships in very exciting style. 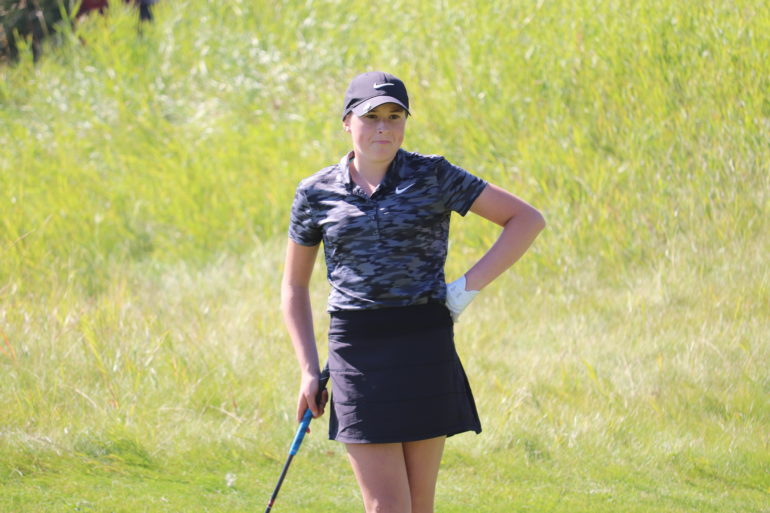 Locked in a battle with Jenna Burggeman of the Derrick Golf & Winter Club, Kucy was in fact a shot behind Jenna as the players arrived on the 17th tee.  Fairly calm early morning conditions had given way to more typical Wolf Creek weather with sunny skies, but very gusty conditions as all the players did a great job of battling through the winds.  Jayla’s par on 17 pulled the players even heading to the final hole, and when Kucy rolled in a 20-footer for birdie and Bruggeman made bogey, the three-peat was complete.  What an exciting finish! 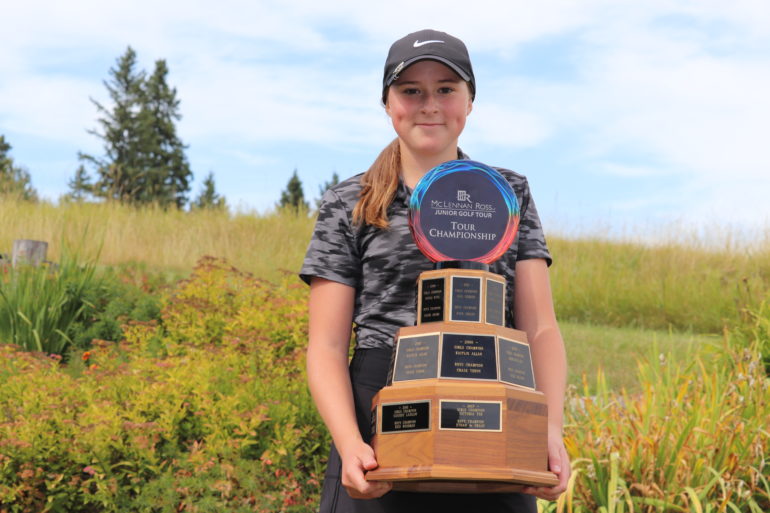 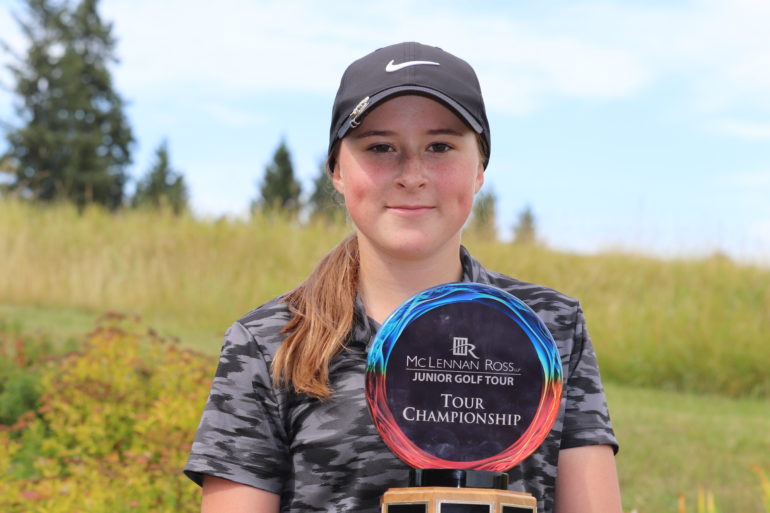 Brooke Brezovski of Glendale completed the podium with an 80 for her  3rd-place finish and rising star Eileen Park of Red Deer finished another shot back on 81.  Park is certainly going to be a player to watch in Alberta junior golf as she has already had a sensational year at the tender age of eleven!

While the junior boys’ division didn’t have quite the drama of the girls’ flight, the play was no less outstanding.  Zach Haydamack of Mickelson National GC in Calgary has really elevated his game this summer at age 15.  Haydamack finished T20 in the Alberta Open Championship in July on Wolf Creek’s Links Course competing against Alberta’s best professionals and adult amateurs, and he finished T4 last week at the Alberta Golf U-17 championship at Alberta Springs Golf Resort in Red Deer.  On Friday, Zach toured the Old Course at Wolf Creek in an outstanding even-par 70, three shots clear of clubmates  Braden O’Grady and Cole Ruelling of Windermere.  Considering the strong winds that most of the older junior boys played through during most of the day, that’s some great golf! 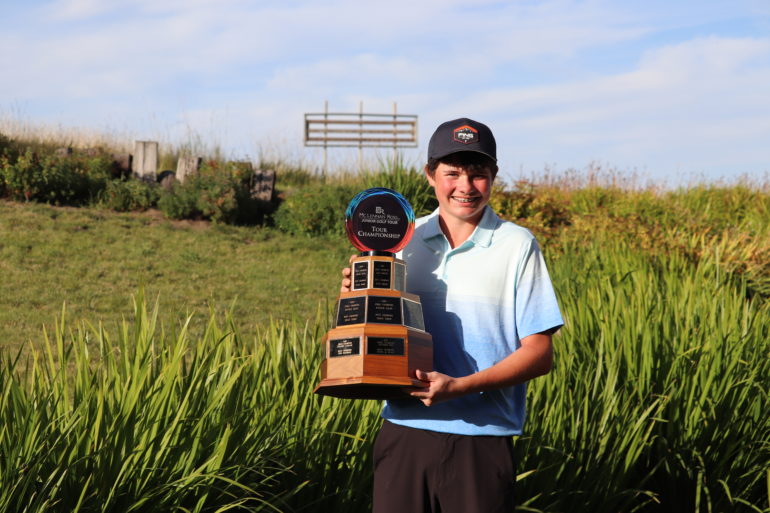 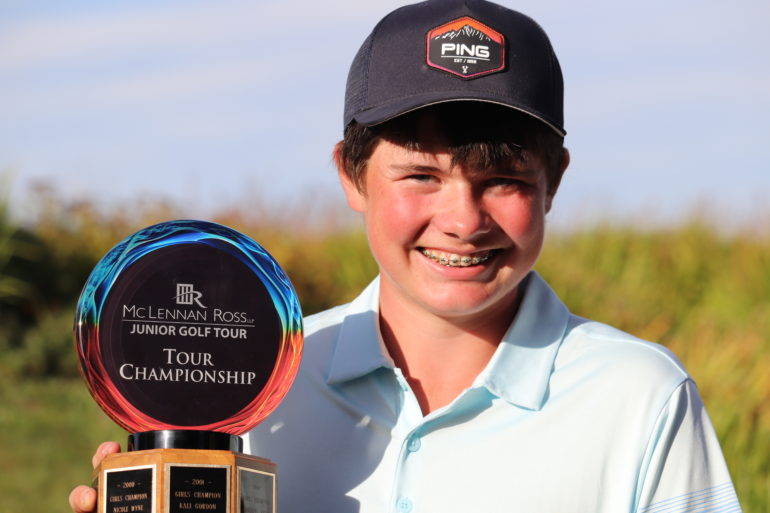 Connor Czirjak of The Winston and Alberta Golf U-15 Champion Jon Vinge of Pinebrook finished T4 and both will be names to watch over the next few years.

The Titleist Order of Merit battles came down to the wire in all three boys’ divisions. Jayla Kucy had clinched the girls’ OOM title prior to yesterday, but with points doubling at the Tour Championship, several players entered the day in contention for the boys’ age group titles. Form held in the flight for boys born in 2001-2003 as leader Cole Ruelling widened his margin of victory by finishing tied for 1st in his age group on the day. In the flight for boys born in 2004-05, Josiah Tong of Heritage Pointe held a narrow 40-point lead over Sirocco’s Jeremy Hart to start play, and when Tong finished out of the top six, and Hart ended up solo 5th, the 40 points he earned left the two players in a dead heat from their summer’s efforts.  In the flight for boys born in 2006 & later, on-site yesterday in the heat of the moment, I had mistakenly announced that Ryan Garbutt had edged Scott Levey for the OOM title by a razor-thin 5 points.  Ryan DID win the OOM, but while Scott was awarded 1st-place prize money on the day by virtue of a comparison of scorecards ( he had a better back 9, 41 to 42), to decide the OOM ties, unless there is an on-course playoff, as in for overall first place for a tournament, the OOM points are split equally for any ties in the top six placings.  I will do up the final OOM standings over the weekend, but I wanted to explain this here in the write-up to alleviate any confusion over the matter for the players.  The correct player did win, but the margin was the 75 points that Ryan held to start the day, not 5 points as announced at the event. Sorry about the mix-up, everyone!

Throughout the year, we generally have listed only the top six and ties in each age division, mostly due to time constraints to get the results up on the Alberta Golf website as quickly as possible after the tournaments.  Today, we are going to list the scores of every player who competed yesterday, not because we are trying to embarass any youngster who maybe had a bad day on a very difficult golf course, but to recognize and celebrate their achievements of qualifying for the Tour Championship in the first place.  There were hundreds of juniors all over Alberta who gave it their best efforts in tournaments all summer who didn’t make it to Wolf Creek, but their participation and efforts deserve our applause as well as those players who made the trip to Wolf Creek on Friday.

We will do a full Year in Review report in due course as we chart what might be ahead for the Tour and junior golf in general in Alberta, but for now, here are yesterday’s results. 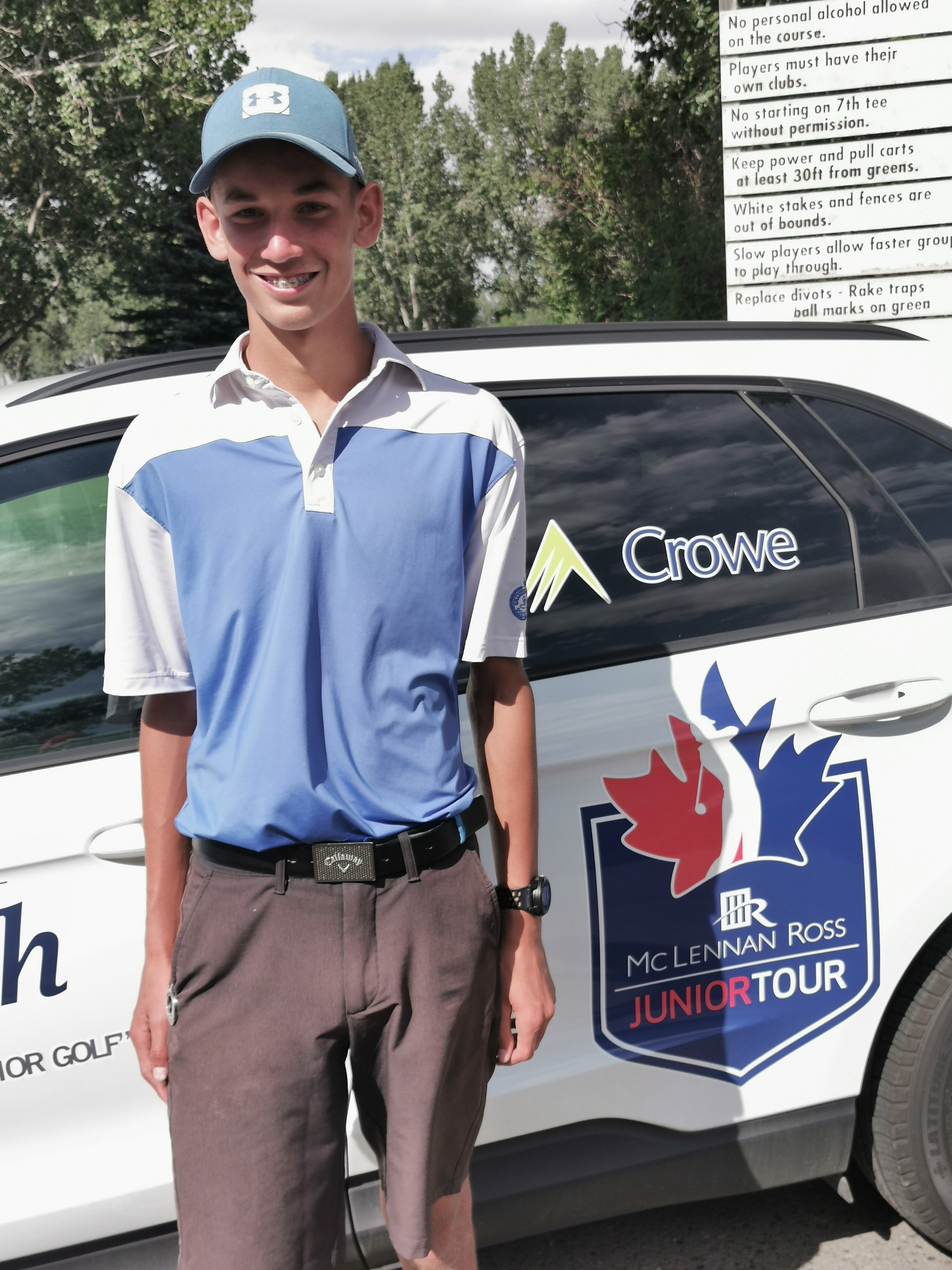