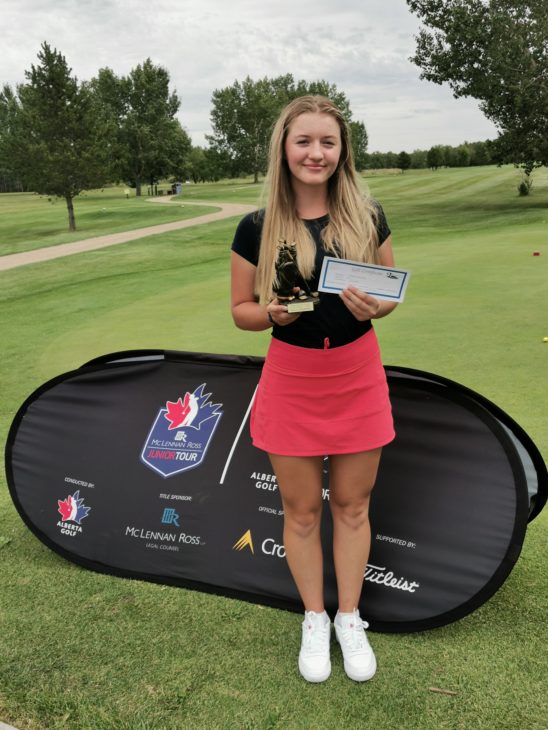 Some days, it’s not all about the numbers.

Today, the McLennan Ross Alberta Junior Tour made its first-ever stop in Wainwright, about 200 km southeast of Edmonton.  With no major population centre within at least an hour, the fear was that maybe not a lot of players would make the trip to Wainwright, but we were pleasantly surprised by a total turnout of about 40 youngsters  on a clear, sunny and windless morning perfect for junior golf. While this certainly wasn’t the biggest field of competitors on the Tour this summer, that’s not the point.  The Tour scheduled this event to give juniors in east central Alberta an opportunity to get their competitive feet wet in a well run tournament fairly close to their homes, but we also had several players on hand from Edmonton, Fort Saskatchewan,  Camrose and even one from Calgary!

Head Professional Josh Copeland and his team put on a terrific display of pre-tournament organization today, with volunteers all over the place to help keep the kids moving along the beautifully groomed fairways and greens of the Wainwright layout.  Oh, and by the way, they do all of this with a total grounds crew of FOUR people.  That is not a misprint.

What a treat it was to see a host club really throw its efforts into helping these kids out, many of whom had never played the golf course. Complimentary water, sports drinks, snacks, ball spotters, registration table workers, you name it.  A big thank you to the entire team in Wainwright.

Mason Kucy of Camrose made the most of his trip this morning, finishing birdie-birdie to post a 1-over par 73, good for a four-shot win over Royal Mayfair’s Joey Caldarella. 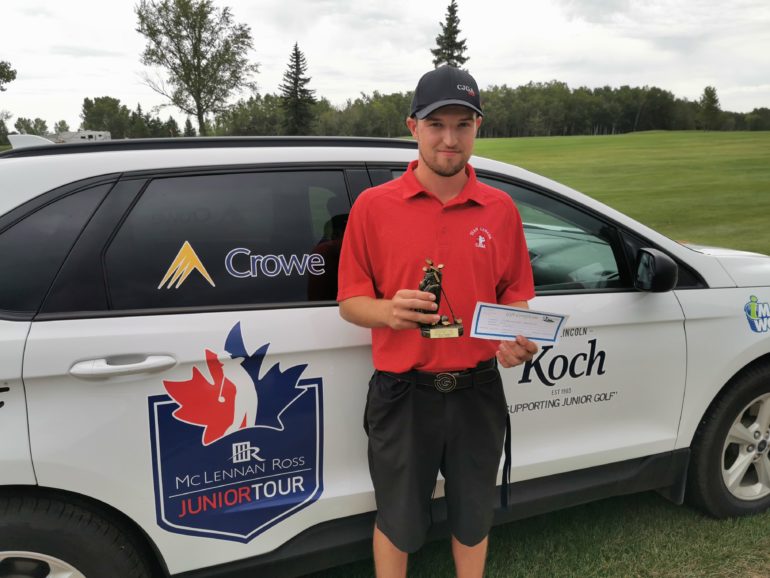 Russell Quinn of the host club finished third, a further shot back on 78, with Mason’s brother Devin another shot back in 4th with a 79.  With the Tour Championship coming up on August 28th, more coveted qualifying spots were up for grabs today.  Caldarella and Quinn each got one with their play, as did the host club’s Cooper Joy from the flight for boys born in 2004-05. 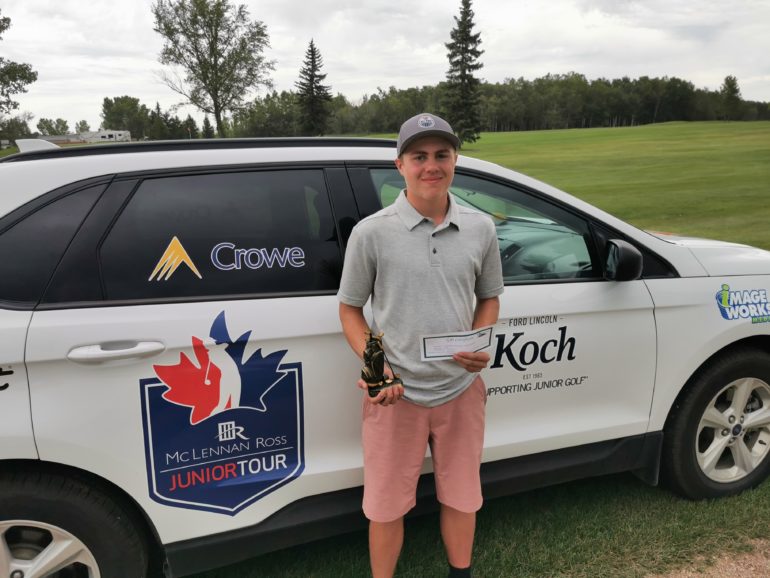 Wild Card qualifying berths went to Brody Theophile (81) of Stony Plain, and Wainwright’s Connor McClennon, who got the last WC spot up for grabs with an 82.

We often think of junior golfers playing their first tournament as being in the 10-12 year old age range, but McClennon, 18, was also playing HIS first-ever junior golf tournament this morning.  You could forgive him for this ‘oversight’ as his summers are usually chock full of training for his hockey career.  The #2 overall selection in the 2017 WHL Bantam Draft, McClennon has been patrolling right wing for the Winnipeg Ice in the “Dub” the last couple of years, and the speedster is projected to be an early-round selection in the 2020 NHL Draft.  I should have granted him a Tour Championship spot on his last name alone, but he earned it!

We did have a drop-off today in junior girls’ participation for the first time this year, but the winner this morning was a very familiar face.  Brynne Davies of Earl Grey in Calgary dominated the Titleist Order of Merit standings in 2019, but was making her first Tour start of the season today.  She made the trip north with her father very worthwhile, as she fired a fine 78 to lock up her spot for Wolf Creek.

We had 13 participants in a 9-hole event for those boys and girls aged 11 and under.  Playing from a forward set of tees, these kids had a blast!  With several volunteers going along with these sometimes nervous youngsters, they zoomed around in under two hours, enjoyed every minute and we even ended up with a playoff!  Andrew Schmidt of Belvedere GCC and Country Side GC’s Jayden Popik tied for first with scores of 41, and Schmidt’s par on the first extra hole of the playoff earned him the title.

The Tour swings back into action this coming Saturday at Woodside GC in Airdrie as the 2020 season is now heading down the home stretch.  After Airdrie, we have Desert Blume in Medicine Hat a week from today, and the last regular season event is in Nanton a week from tomorrow.  We believe that spots are still open in all three tournaments.  Call the host clubs to enter.

TITLEIST ORDER OF MERIT AS OF SUNDAY AUGUST 16TH 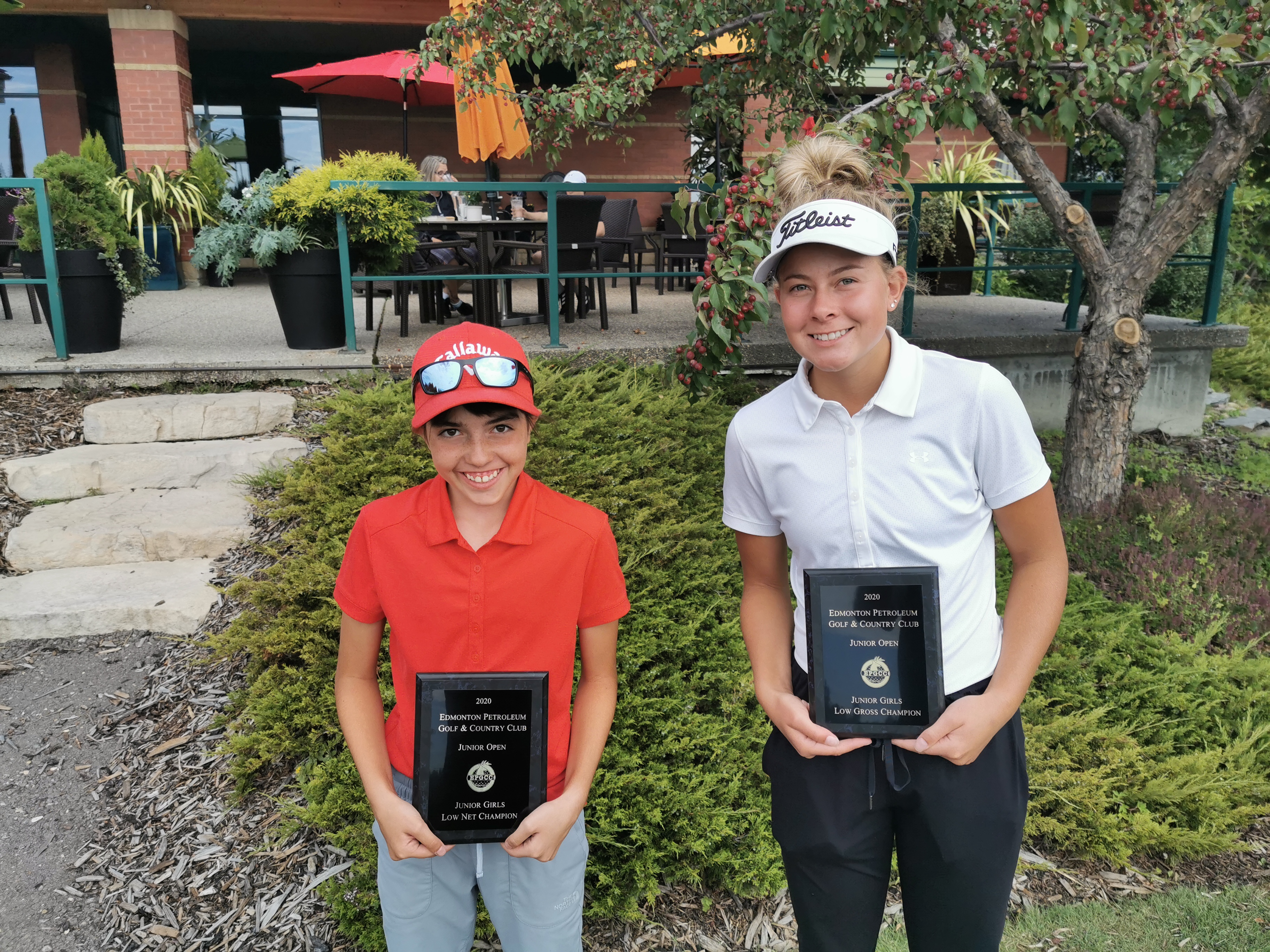