“Youth is the most beautiful thing in this world—and what a pity that it has to be wasted on children!”

.……..George Bernard Shaw.
Truer words were never spoken, as youth was certainly served today over the sun-drenched fairways and greens at RedTail Landing Golf Club at Nisku.  A sold-out field of 73 junior golfers from as far away as Grande Prairie, Ft. McMurray and Calgary dropped in for today’s latest stop on the McLennan Ross Alberta Junior Tour.

The most startling result was turned in by Eileen Park of the Red Deer GCC, who fired a fine 77 to capture the Junior Girls’ division. 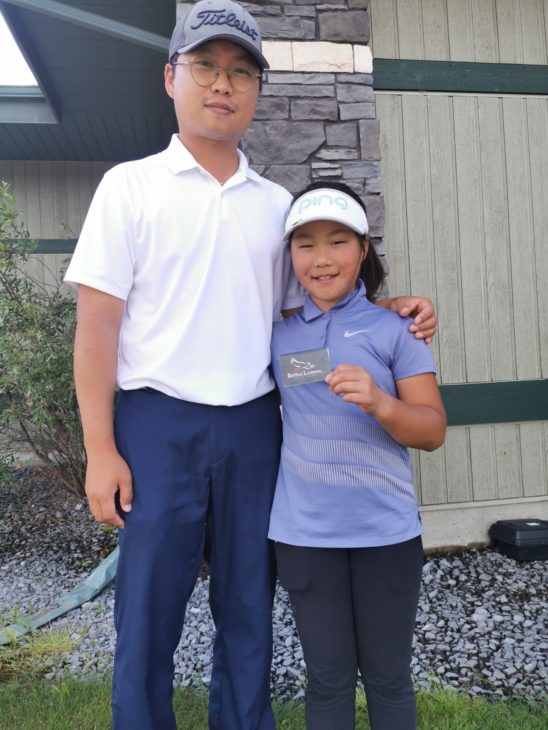 While the score in and of itself wasn’t overly remarkable, it certainly was when you consider that this tiny dynamo of talent is all of ELEVEN  years old!  I remember a young Wil Bateman being the first ( and still only) 11-year-old to capture the boys’ division at a McLennan Ross Alberta Junior Tour event at Goose Hummock Golf Resort over 15 years ago, firing a 73 that day, and this young girl’s score today was equally impressive.  Playing off of an 8 handicap in Red Deer, this youngster made her first-ever McLennan Ross event a very memorable one, indeed.  Two-time defending Tour Champion Jayla Kucy of Camrose was in the field today, finished T2 on 80 with Tasha Wallace of the Public Player Club, which should give you some perspective on Park’s accomplishment today.  All three girls earned spots in the Tour Championship on August 28th at Wolf Creek Golf Resort with their efforts today.

The overall low score today in the Junior Boys’ division was turned in by a grizzled ‘old’ Tour veteran, Ryan Garbutt of the Windermere GCC. Garbutt’s 73 was  from the age group for boys born in 2006 and later. Still two weeks shy of his 14th birthday,  Ryan’s score today was actually five shots higher than his opening round in the Edmonton City Junior at the Royal Mayfair over the weekend.  (Don’t ask about Round Two).  Ben Lovrod of Grande Prairie and Cayden Clark of  Glendale were best among older boys born between 2001-2005, firing matching 74s to both punch their ticket to Wolf Creek.  Also gaining spots for the Tour Championship this afternoon was the host club’s Sahaj Klair (76) from the flight for boys born in 2004-05. Scott Levey of Belvedere and Windermere’s Peter Hlushak bagged spots for the Tour Championship from the flight for boys born in 2006 and later with their 75s. Owen Lai, playing out of RedTail Landing this year, got a Wild Card spot, also on 75. Scores overall were the lowest on Tour so far this year, as players took full advantage of ideal scoring conditions this morning.

The Tour moves an hour east tomorrow to Whitetail Crossing GC in Mundare for another sold-out Tour stop.  Where else can the kids snag Stawnychy’s garlic sausage as prizes for Closest to the Pin or Neat Scorecard Awards?  Camrose’s event on Wednesday is also full as interest in junior golf and the McLennan Ross Alberta Junior Tour continues at its highest level in over a decade.