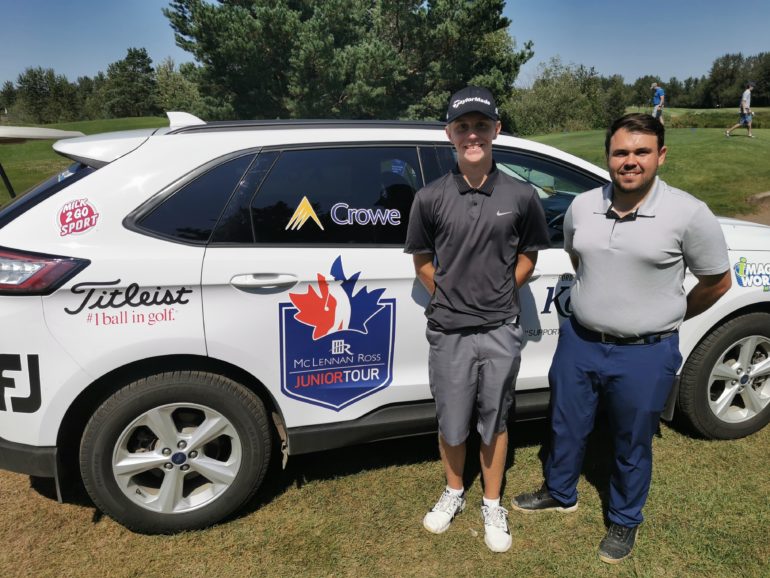 That was a busy week on Tour!  Three sold out junior golf tournaments over four days of competition saw some career-bests and sparkling play from dozens of junior golfers from across the province.

From our first hot weather of the year and a first-time winner on Tuesday at Collicutt Siding GC in Crossfield  to Alberta’s best female golfer dropping into Montgomery Glen GC in Wetaskiwin on Tuesday to Thursday and Friday’s only 36-hole Tour event of the summer at Goose Hummock Golf Resort, we can now finally take a bit of a breather!

Head Professional Kyle Winters is in his first year as head man at the very popular Goose Hummock Golf Resort northeast of the Edmonton city limits near Gibbons.  “The Goose” has always been one of the more ‘fun’ events on the McLennan Ross Alberta Golf Junior Tour, and while Covid restrictions this year made it impossible to have their exciting Horse Race after Thursday’s round, the 36-hole tournament was completely sold out again this year.  Sixty juniors from as far away as Calgary enjoyed the outstanding hospitality and superb course conditions.  The grounds crew at Goose Hummock have done a fantastic job over the last two weeks after torrential rains left many parts of the golf course under water.

Overnight boys’ division leader Ethan Couch of the Glendale GCC followed up his opening-round 70 with an even-par 71 today as his 36-hole total of 141 was 5 shots clear of Sturgeon Valley’s Lucas Sadownyk (74-72) and Ethan Howes of Ft. Saskatchewan.  Howes fired a career-best 68 today to improve on Thursday’s 78 by ten shots and capture the flight for boys born in 2004-05 in the process.   Mason Kucy (76-73) was alone in fourth overall at 149.   Couch’s effort was noteworthy in that his overnight three-shot lead was gone after the 2nd hole when he hit it OB on his way to a triple-bogey ‘hockey stick’ 7. But “Hoover” cleaned house the rest of the way, playing 4-under par golf until a meaningless bogey on the final hole.  His father Jeff, a longtime Glendale member and former club pro and fine player in his own right, admitted to the world on Twitter that he would have ‘folded his tent’ after the triple!  Ethan must have inherited his competitive genes from his mom’s side!

Scott Levey (76-77) of Belvedere cruised to a 5-shot win in the flight for boys born in 2006 & later and we had a three-way photo finish for runner-up in that flight.  Payton Benneweis of  Edmonton CC, Ryan Badger of RedTail Landing, and Jared Van Hecke of Ft. Saskatchewan tied for 3rd with 161 totals and all earned their way into the Tour Championship at Wolf Creek Golf Resort on August 28th in the process. Other qualifiers today included the aforementioned Couch, Sadownyk, Kucy, and Howes.

As of this morning, both of next week’s events still had a few spots available and with the following week’s Edmonton area tournaments in Stony Plain and at the Edmonton Petroleum GCC sold out for weeks, the Barrhead and Trestle Creek stops will be the best chance for northern Alberta juniors to get in some quality junior golf competition and compete to earn their way into Wolf Creek at the same time.
OVERALL TOP TEN:

The following players are the top 6 and ties in each age group, thereby earning Titleist Order of Merit ranking points.