The 25th Anniversary Season of the McLennan Ross Alberta Junior Golf Tour got off to a fantastic start Thursday over the slick, rolling greens and lush fairways at the Innisfail GCC.  Long regarded as one of Alberta’s most challenging courses, the 27-hole central Alberta layout proved to be more than enough challenge to 50 two-person teams of junior golfers paired with family members or friends in a Parent/Child format.  Teams were on hand from as far north as Edmonton to as far south as Brooks, with many of the partnerships consisting of younger junior competitors getting their first taste of tournament competition. We’re not sure if the kids were more nervous than their parents, grandparents, brothers or close buddies, but judging from the smiles on the faces of the majority of the players throughout the day, I think the big winner today was Junior Golf.

In the team competition, home course knowledge proved key as Innisfail junior Cole Fox paired up with the host club’s Jace Ouelette, himself a veteran of dozens of McLennan Ross Alberta Junior Tour events over the years prior to Jace’s graduation from junior golf competition last year.  The local pair fired a nifty 10-under par 62 in the net better ball format, but you can hardly accuse these guys of sandbagging it!  They only received four shots TOTAL for their combined handicaps as Ouelette scorched his home track with “Six or seven birdies,” while Fox chipped in a few of his own as they kept the mistakes to a minimum.  They needed every putt too, as they edged Olds junior Reid Williamson and his father Russ by a single shot.  Three other teams finished T3 with 7-under par 65s.  In the second year of the Parent/Child format for the Innisfail tournament, we were pleased to have seven junior girls on hand today, and about five moms playing with their kids.
The 50 juniors on hand were also playing simultaneously in their own individual stroke-play competition for the Innisfail Junior Open title and coveted qualifying spots in the silver anniversary Tour Championship, which will be held Friday, August 28th at Wolf Creek Golf Resort.  As mentioned earlier, the Innisfail course has brought many of the province’s best junior golfers to their knees over the years in their quest to solve the tree-lined layout and notoriously speedy putting surfaces.  Sebastian Berube of Priddis Greens GCC in Calgary earned his 2nd Tour title (Strathmore 2019) as his 79 was the only score under 80 in the two age groups for boys born between 2001 and 2005. 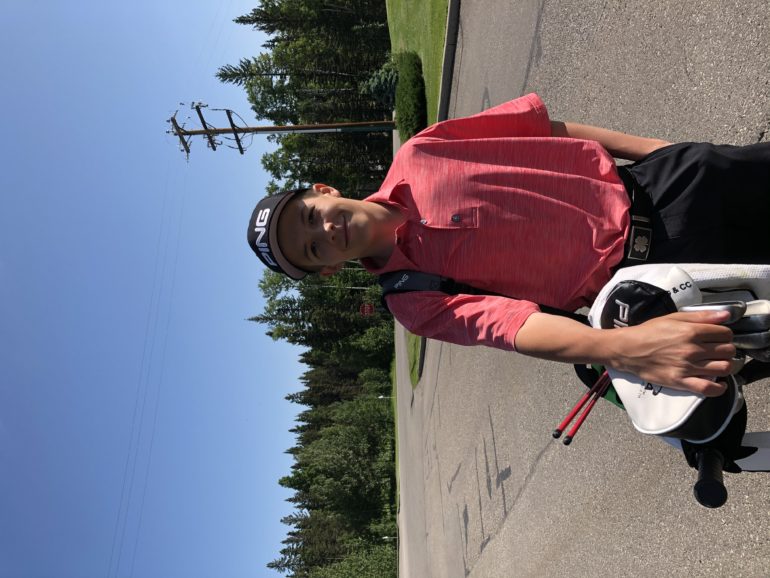 Sebastien Berube shoots 79 to win the event.
It was the Cole Show for runner-up as Cole Ruelling of Windermere and the aforementioned Cole Fox from Innisfail were a shot back on 80.
Berube’s 79 wasn’t actually the lowest score posted today as up-and-comer Ryan Garbutt of Windermere toured the course in 78 shots, but his age group of boys born in 2006 and later had the benefit of competing from the somewhat shorter yellow tee blocks.  That’s certainly not meant to diminish Garbutt’s achievement, as you still have to keep the ball out of the trees and get it into the hole in as few strokes as possible. Chris Colberg of Bearspaw GCC in Calgary was a shot in Garbutt’s rear view mirror with a fine 79 of his own. 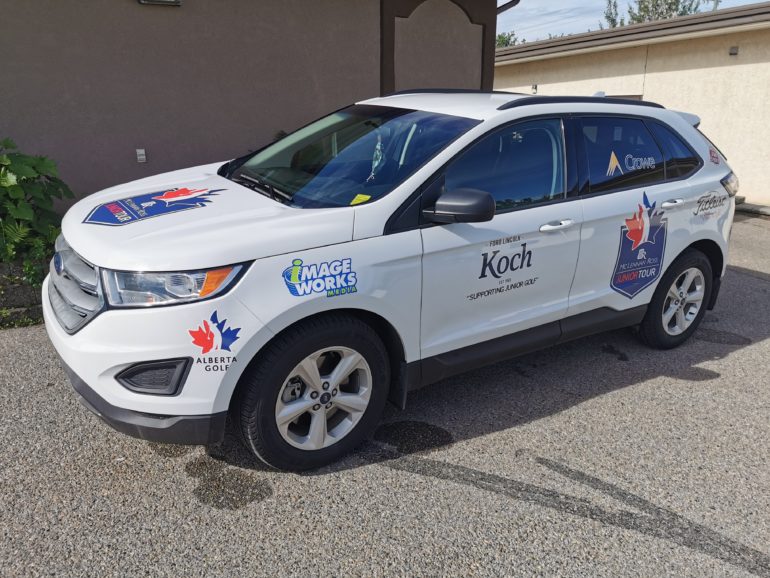