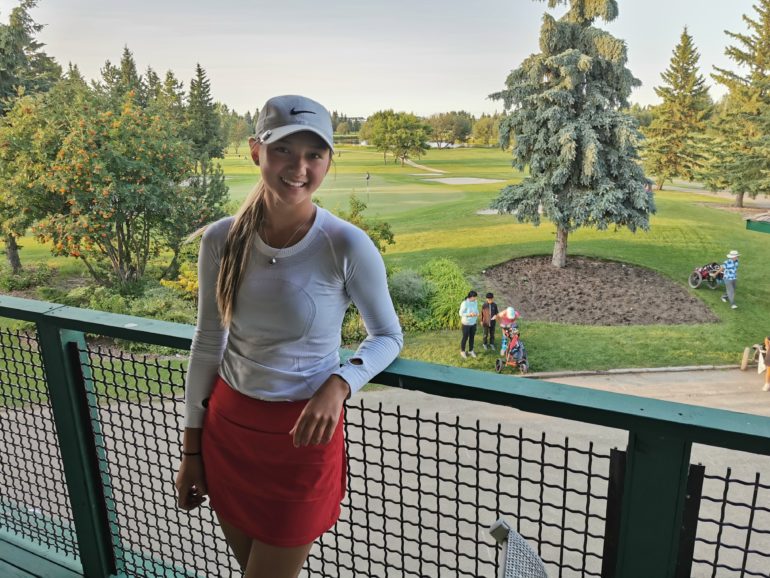 What had been a relatively straight-forward junior golf tournament turned very interesting late this afternoon at the Stony Plain Junior Open.  After starting out batting a two-club wind, 64 juniors from as far away as Calgary were winding down their afternoons as the wind began to subside.  However, as the junior girls’ flight approached the 17th hole, a family of hawks turned the day into a somewhat scary moment.

Club officials told us that one of the hawks had been wounded a few days ago,  and two other hawks have been trying to protect the other bird from predators.  In this case, those predators seemed to be the junior girls and on-course officials, at least from the hawks’ point of view.  One of the birds repeatedly dive-bombed a couple of the players before Grant Cammidge of Alberta Golf, the former head professional at the Stony Plain Club, came to the rescue.  Cammidge was able to distract the aggressive hawk long enough for the kids to get to safety, and in order to help make sure the players weren’t in further danger, we took the 17th hole out of play for the 14 girls on hand still on the course and they all skipped the 17th hole entirely.  “Free pars,,,whooooo hoooo!” 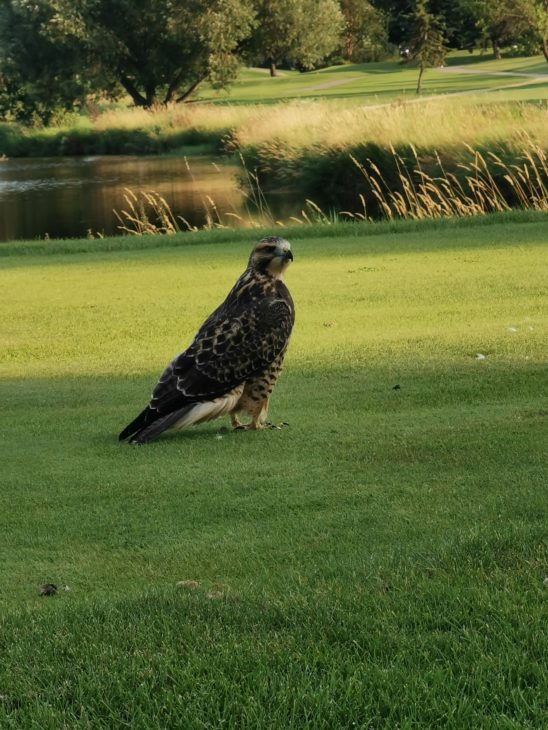 Some very fine golf was played as well, not the least of which was turned in by Alexa Wingnean of the Derrick.  Wingnean fired an outstanding 1-over par 73, one of her best rounds in competition, to easily capture the junior girls’ title.

Kalee Seto of the Royal Mayfair was a dozen shots back with an 85.  Both Wingnean and Seto had previously qualified for the Tour Championship coming up at Wolf Creek Golf Resort on August 28th, leaving today’s qualifying spots to Samantha Lin of Jagare Ridge and the Derrick’s Ellie Johnson, tied for 3rd with scores of 88.

In the junior boys’ division, Ethan Wilson of the Glendale handled the strong winds the best, shooting a solid 75, two shots ahead of Glendale’s Connor Kurysh and three strokes clear of Kennedy Bailey-Borges of the Windermere.  Greg Gurba of The Quarry was solo fourth with a 79. Wilson and Kurysh were new qualifiers today for Wolf Creek and will be joined by  11-year-old Chase Lassman of the host club and Ryan Zhang of Windermere, who tied for the available qualifying spot up for grabs in the flight for boys born in 2006 & later with 88s.  Overall Wild Card qualifiers included Bailey-Borges along with Tyler Lau (83) of the Derrick.  With only one event remaining on the Tour schedule in the Edmonton area this coming Thursday at the Edmonton Petroleum Club, spots for local youngsters in the Tour Championship are at a premium.

THIS WEEK ON TOUR:

Wednesday,  August 12th – Taber.  Spots are possibly still available but the club may have closed off entries on Monday evening, so call first thing Tuesday to make sure.

Thursday, August 13th – Edmonton Petroleum GCC.  SOLD OUT.  I saw the draw tonight, and we have the strongest junior girls’ field of the season with 25 players, including several competitors from the Alberta Golf U-19 Championships. The boy’s field is outstanding as well.  First tee time is a robust 7:00 a.m.  Bring coffee!