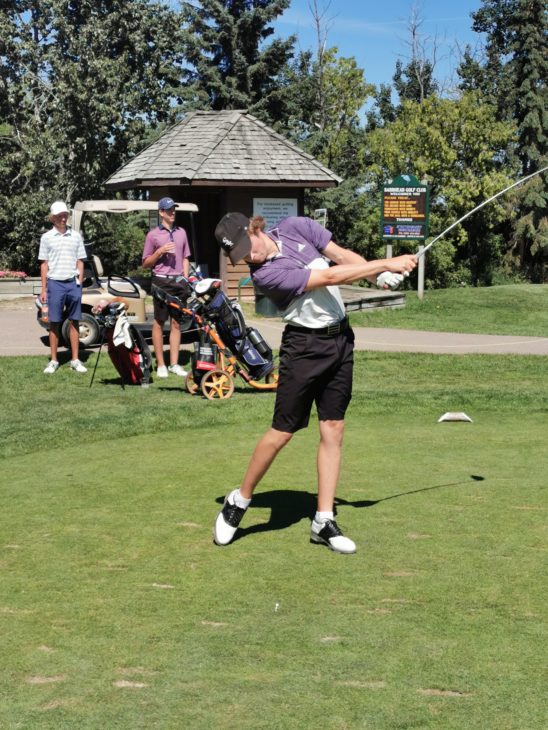 After a five-day hiatus, the McLennan Ross Alberta Junior Tour swung back into action this morning at the Barrhead GCC.  Always one of the best-conditioned courses on the Tour, the staff at Barrhead once again put on a well organized and fun tournament for 40-odd juniors from as far away as Calgary.  It was perfect weather for golf, with sunny skies and barely a hint of wind, and the kids did not disappoint.

With the NHL playoffs now in full swing, it only seems appropriate that we were treated to playoff golf in Barrhead.  Brothers Mason and Devin Kucy of Camrose tied for the overall low gross score of the day with even-par 72s and we headed back out on the course for ‘overtime’.  Mason,19, may have felt like he let this one get away as he stood on the 18th tee two-under par for the day, but a double bogey 6 made the playoff with his 18-year-old brother Devin necessary.  After both players parred the first three holes of the sudden-victory playoff, we decided to declare the Kucys co-champions, get the prize presentation for all the other players underway, and let the brothers play a best-of-99 ‘Rock, Paper, Scissors’ in the car on the way home to decide bragging rights. 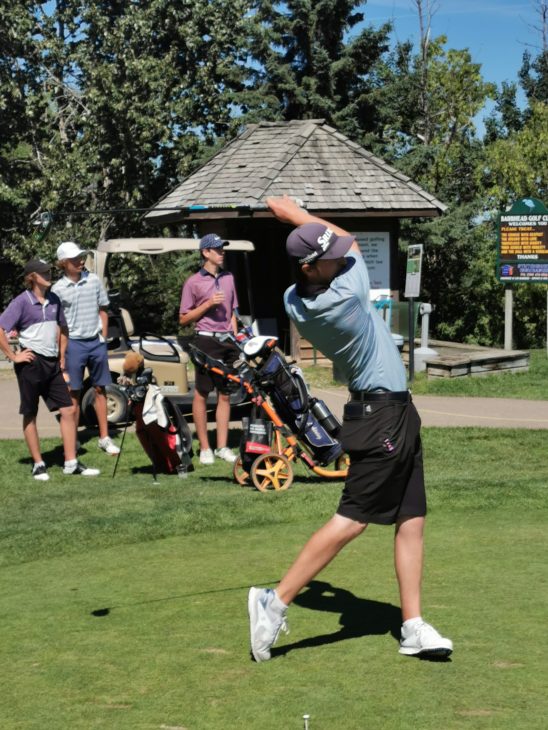 Blake Reimer of Windermere finished solo 3rd with a 75.  Mason had previously qualified for the upcoming Tour Championship, so Devin will be relieved to join Mason and their sister Jayla in the field at Wolf Creek.  Reimer also snagged a spot in the Tour Championship by virtue of his play today.

Other qualifiers today included Westlock’s Reid Casvant (77) from the flight for boys born in 2004-05, along with Ryan Badger of RedTail Landing and Brady Weiss of The LInks at Spruce Grove, whose matching 80s were  low in the flight for boys born in 2006 and later.  Weiss’ round was an especially nice story as his round today was his career-best effort.  Can you even HAVE a ‘career’ at 13?  Just wondered….

Wild Card qualifiers for Wolf Creek today included Brolin Badger of the Edmonton CC, Gavin Moes of the host club, and Nathan Piers of Riverside, all of whom finished on 79.

IMPORTANT!!!   Gavin Moes and Ryan Badger – You kids got away early today and I wasn’t able to get your contact information regarding the Tour Championship.  Please email me so I can get you your information.  Thanks.

The Junior Girls’ flight today included Brooke Frerichs of Glencoe GCC in Calgary, making her first Tour start of the summer.  Frerichs, who finished 21st at last month’s  Alberta Golf U-19 Championship, had it going well today.  The Glencoe junior was 2-under par at one point on the back 9 before a string of bogies brought her final score up to 2-over par 74.  A fine round nonetheless and it earned her a spot in the Tour Championship in the process. Jayla Kucy of Camrose was runner-up with an 81.

The Tour moves out to Trestle Creek Golf Resort near Entwistle tomorrow for another sold out tournament.  We expect a solid field of 64 juniors on hand for their 10 a.m. shotgun start.  Next week’s Edmonton area events at Stony Plain on Monday and the Edmonton Petroleum GCC on Thursday have been sold out for weeks.  Spots ARE available for the Tour’s southern Alberta event next Wednesday in Taber.

The following players finished in the top 6 and ties in each age group, thereby earning Titleist Order of Merit Ranking Points.