We WARNED them that this was a tough golf course!

But did they listen?  NOOOOOOOOOOOOO……Two players broke 80.  Three-time 2019 Tour winners Devin Kucy and Chase Bodoano shot 87 and 93 respectively. In fairness to Chase,  he was  gutting it out with a bum shoulder, but you get the idea of what the players were up against this morning at Black Bull Golf Resort at Ma-Me-O Beach.

Thankfully 33 juniors from as far away as Calgary and Strathmore didn’t listen, and descended on Black Bull today to test their games on arguably the most difficult course on the McLennan Ross Alberta Junior Tour.  Good for the kids to have the gumption to tackle this toughie, which was in superb shape considering all the recent rains.  Several kids mentioned these were among the smoothest and fastest greens they have played all summer.

Cole Ruelling of Lewis Estates managed his game the best among the numerous low single-digit on hand this morning, turning in a 2-over par 75  (yes, par is 73) to edge Blake Hammel of Ft. Saskatchewan by two shots.  These were the only players under 80, with Jarrett Bossert of Broadmoor alone in third on 81. 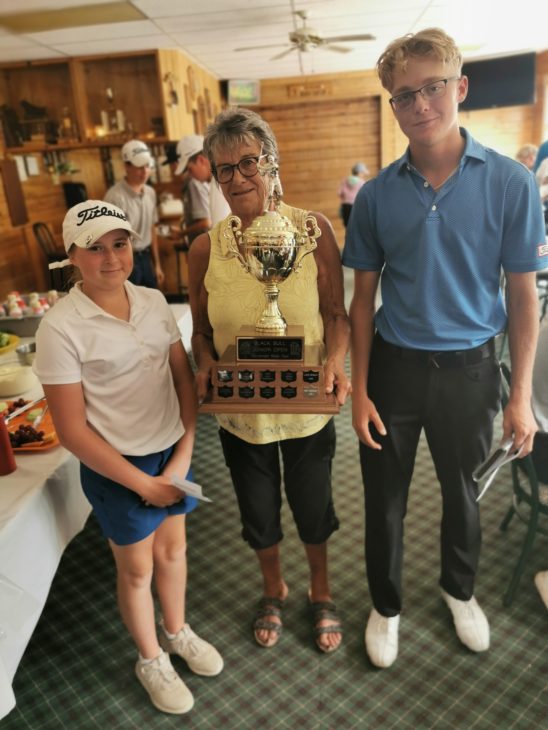 All three junior girls on hand today had previously qualified so no new girls earned their way into next Friday’s event today, but 2018 Tour Champion Jayla Kucy tuned up with an 83, ten shots clear of Earl Grey’s Brynne Davies.

On Monday, August 19, the Tour returns to Medicine Hat for the first time in about 15 years, to the wonderful Desert Blume GC.  I for one am eagerly looking forward to seeing Desert Blume for the first time.  The course has hosted several major Alberta Golf championships and will be a worthy test for the players,despite the fact the course has ONE tree!  One.   We would love to see more players step up and enter this event. With only a few days to go prior to the tournament, we sure could use a couple of dozen kids or more to make some plans to get in another junior tournament before school starts AND perhaps earn their way into the field next Friday at Wolf Creek.  The final 2019 regular season Tour event goes next Tuesday in Nanton.  Entries are open now for both Desert Blume and Nanton.

These are the top six players and ties in each age group, who thereby earn Titleist Order of Merit ranking points.