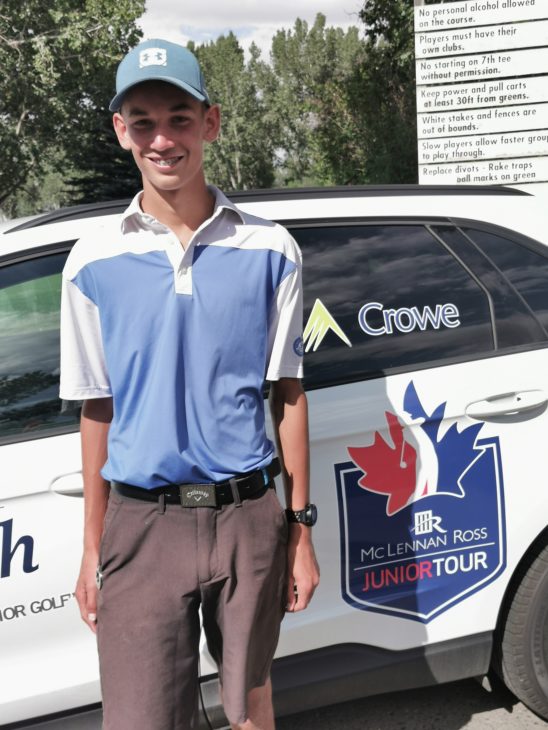 Get out a huge ribbon and put a bow around the 2020 ‘regular season’ for the McLennan Ross Alberta Junior Tour!   We had our last event of the 2020 schedule yesterday in Nanton, one of the four remaining charter members of the Tour dating back to our first year in 1996 (Lacombe, Innisfail and Ponoka).  In many ways, the Nanton event was a microcosm (I’ve been waiting 25 years to use that word in a write-up) of this year.  A sold out field. Lots of kids new to junior golf tournaments.  A big field of girls.  And loads of fun!

The Nanton event was the final opportunity for juniors to get in a Tour event before heading back to school and before the 25th annual Tour Championship coming up this Friday.  It was also the Last Chance Saloon for any kids who hadn’t yet earned their way into the field at Wolf Creek and we were able to put some smiles on several youngsters’ faces who had been trying all summer to get that coveted Tour Championship entry.  Tour regular Jeremy Hart of Sirocco GC was best in the boy’s division on Monday, firing a steady 4-over par 75 to beat Braeden van Dusen of Lethbridge CC and Mateo Kern of Canyon Meadows by a single shot.  Connor Czirjak of The Winston GC was another shot back in solo 4th on 77, but had maybe the biggest grin of the day as his play nailed down a spot for Wolf Creek after several close calls over the course of the summer.  Kern and van Dusen also punched their tickets to Ponoka for Friday with their efforts on Monday.

Boys’ Wild Card spots went to John Vinge (80)  of Pinebrook, along with  clubmates Alex Nekich (78) and Braden Petro (78) of Lethbridge CC.  It was nice to see a ‘bounce-back’ round from Nekich who had had a rough day on Monday at Desert Blume in Medicine Hat. ( Don’t ask!) The final two Wild Card spots went to the Lehmann Brothers, Ben and Zach, of Willow Park, both of whom also shot 80.

In the junior girls’ division, Emily Cornwall of Springbank Links took down her second Tour win in four days (Woodside) with a fine 76 to best a big field of 15 girls.  Many of these youngsters were playing in their first or second tournament, but hopefully the experience will help whet their appetites for more competitive opportunities next year.  New qualifiers today were Justine Leon (89) of Lakeside GC in Chestermere, along with Brooklyn Campbell  of Didsbury and Neige Dunn of The Hamptons, both on 93.  Congratulations to all the kids who qualified on Monday.

See you at The Wolf on Friday!