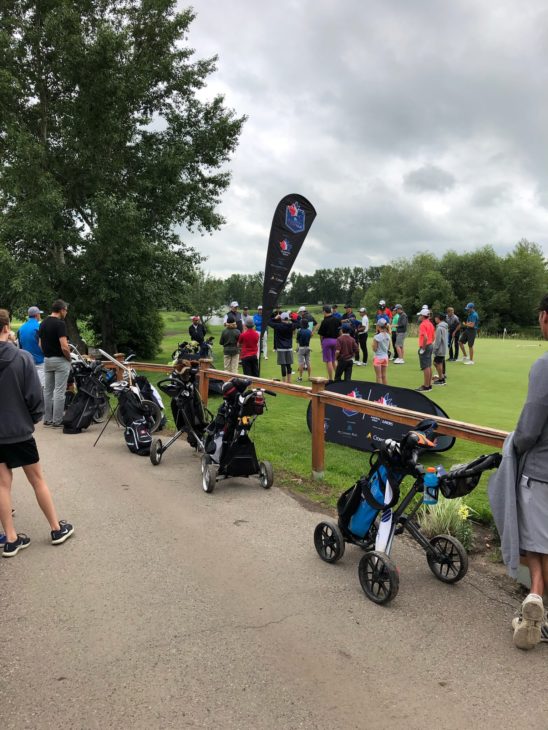 2019 REVIEW: The McLennan Ross Alberta Junior Tour moved north to Carstairs today after yesterday’s event at Pinebrook GCC in Calgary. We had 30 juniors on hand from Edmonton to Calgary and several points in between to vie for the overall title and for coveted spots in the 24th annual Tour Championship.

Devin Kucy of Camrose fired a solid 1-over par 73 to capture the overall low gross hardware in the junior boys’ division. Zach Grant of Pinebrook didn’t have his best day yesterday at his home track, but toured the Carstairs layout in 75 blows today, good for 2nd place, only 2 strokes behind Kucy. Jarret Bossert of Broadmoor GC in Sherwood Park and Kucy’s clubmate Rory Wutzke tied for third overall another two shots back on 77. Kucy, Grant and Wutzke all earned spots in the Tour Championship by virtue of their performances today, as Bossert had qualified earlier in the schedule. They will be joined by Wild Card qualifiers Joe Kelly (80) of Innisfail and Payton Born (80) of Valley Ridge. Branden Lailey of Wintergreen (87) qualified out of the flight for boys born in 2005 & later.

In the Junior Girls’ division today, Brynne Davies of Earl Grey won her second event of the Tour season in style, blistering the back 9 in 2-under 34 en route to an outstanding score of 76. As Davies was already in the field for Wolf Creek, today’s qualifying spot went to runner-up Morgan McInnis of Olds, with a 98.

The Tour moves north about 35 km in the morning to the Olds Central Highlands GC for a 10 a.m. shotgun start. Next week’s three events are north of Red Deer at Whitetail Crossing GC in Mundare on Tuesday, Montgomery Glen GC in Wetaskiwin on Wednesday, and Thursday in Camrose. Entries are now being accepted for all three sites, and we expect to see many of the Edmonton and area juniors at those events next week.

This is not a complete list of every competitor today. These are the Top Six and Ties in each age group, who earned Titleist Order of Merit ranking points.