The McLennan Ross Alberta Junior Tour took a swing into east central Alberta this morning for the sold-out Whitetail Crossing Junior Open in Mundare. Fifty juniors from as far away as Grande Prairie and Calgary dropped in for today’s tour stop, the second of a three-events-in-three-days schedule this week.

We had no lack of excitement today as we had the first boys’ playoff of the season with three competitors firing even-par 72s to force overtime.  Cole Ruelling of Windermere, Rory Wutzke of Camrose and Heritage Pointe’s Josiah Tong finished in the dead heat and the three youngsters headed down the first fairway for a sudden-victory playoff.  Ruelling’s routine par proved enough to capture the title as the other players visited the notoriously nasty fescue grass lining many of Whitetail Crossing’s fairways. The win was Ruelling’s first of the 2020 Tour season. Wutzke is a familiar face on Tour in and around the lead, but Tong’s round was fun to see: a career-low effort! Well done by all the kids! 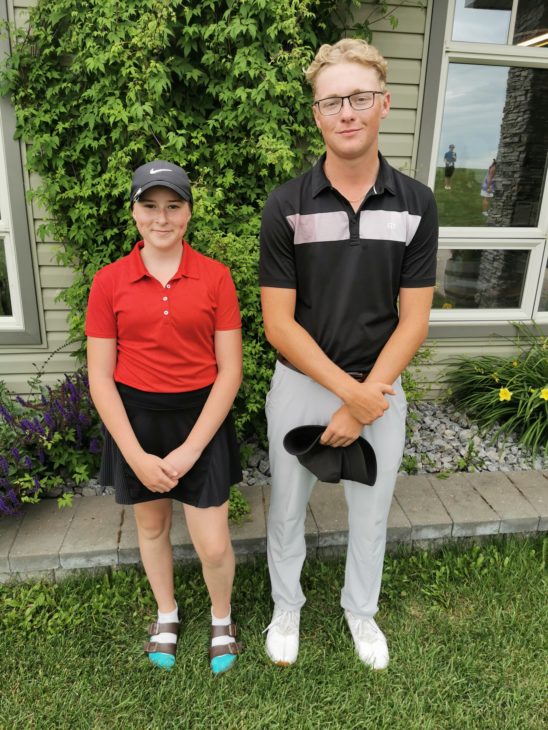 An interesting feature of today’s play was the flock of eagles from the players.  We had at least 5 that I was made aware of, including a chip-in deuce on the par-4 9th hole from a player who nearly drove the green on the downwind 353-yard par-4 hole.  The other eagles today were of the more usual variety, on par-5 holes, but they were flying out there this afternoon.

With the season about one-third complete, we continued our unbroken run of sold out events  as interest surges in junior golf in general, and the McLennan Ross Alberta Junior Tour in particular.  The streak will continue tomorrow in Camrose and again next Tuesday at Collicutt Siding GC in Crossfield.  A few spots remain open at this time for the Montgomery Glen event next Wednesday and the 36-hole Goose Hummock Junior Open next week on Thursday and Friday.  We fully expect those events to fill up as well, so if you have plans to enter upcoming Tour stops, please don’t delay.  We have also learned today that the Edmonton Petroleum Club event on August 13th is full and only a handful of spots remain up for grabs at Stony Plain on August 10th.

In the Junior Girls’ division today, form held as two-time defending Tour Champion Jayla Kucy of Camrose was best of the seven girls on hand, firing a tidy 77, ten shots clear of Zoe Banack of Edson. Banack wasn’t entirely unhappy though, as her effort snagged the available Tour Championship spot up for grabs today. Anna Kibria of the Edmonton Petroleum GCC was third with a 90.

Tour Championship qualifying spots for the junior boys today went to Greg Gurba (77) from the flight for boys born in 2001-03, Matthew Mayowski (76) of Drayton Valley in the flight for boys born in 2004-05, and Jace McFaul (81) of RedTail Landing from the division for boys born in 2006 and later. Wild Card qualifiers were Jadan Patel of Inglewood GCC in Calgary and Aidan McGilvery (sp?) of ‘we’re not sure because he left the course before we could get his information’. Aidan, if you are reading this, please email me so I can get you your information about the Tour Championship.  Both Jadan and Aidan shot 81 today.

The Tour moves southeast of Edmonton tomorrow morning to Camrose for another sold out Tour event.  Tee times start at 9 am for the 60 players registered.  See you there!

* = Player won tournament on the first hole of a sudden-victory playoff.