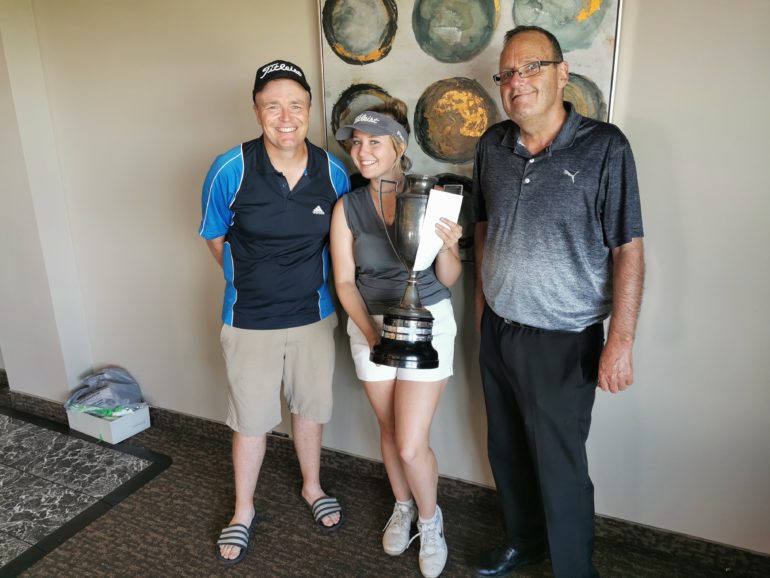 About seven years ago, a then 17-year-old Jaclyn Lee, fresh off capturing both the Alberta Golf Junior and Ladies Amateur Championships, dropped in to the McKenzie Meadows Junior Open on the McLennan Ross Alberta Junior Tour.  It was a way for Jaclyn to say ‘thank you’ to the Tour for providing a platform to help her launch a very successful career that led her to Ohio State University and the LPGA Tour.  We had a similar ‘wow’ moment this morning when the first look at the draw for today’s Montgomery Glen Junior Open featured the name of Annabelle Ackroyd of The Glencoe GCC in Calgary.  Ackroyd won the Alberta U-19 Championship earlier this month at The Links at Spruce Grove by six shots and was perfectly positioned the week prior to take the Alberta Amateur Ladies Championship when the final round was washed out, Ackroyd had to settle for a T3 finish, only two strokes off the lead. So, it was a very pleasant surprise to see Annabelle and her good friends Kaitlyn Wingnean of The Derrick and MacKenzie Baustad of Canyon Meadows in the field this morning. 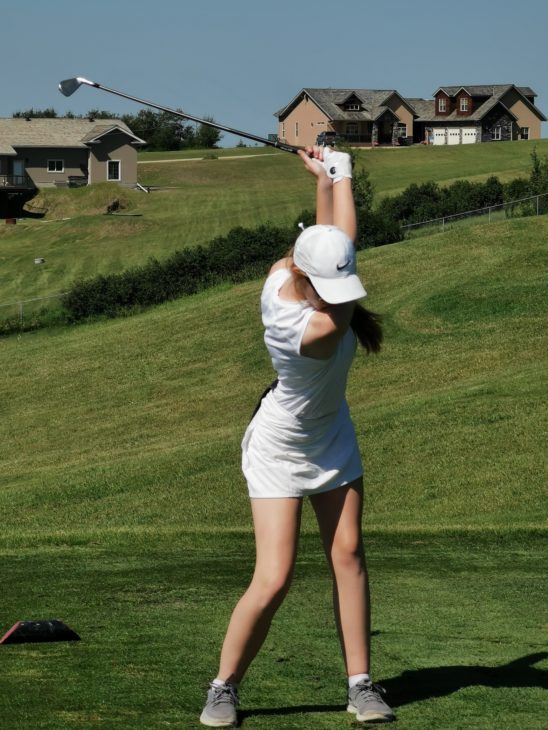 The girls certainly did not disappoint with their play, as Ackroyd fired a 3-under par 71 (women’s par is 74) to edge Baustad and Wingnean by a single shot as the other girls were hot on her heels with 2-under par 72s of their own.  Baustad could have been even lower (she had 7 birdies on her card) were it not for an “ugly” quadruple-bogey 8 on the 12th hole after being in a greenside bunker in two. In fact, Ackroyd’s score was the overall low gross score of the day, boys included, and the club’s tradition has been to award a beautiful permanent trophy to the overall low gross champion.  The trophy has been awarded since 1952 and this was the first time that a junior girl’s name will be engraved on the hardware.  Ackroyd might be able to compete in the Tour Championship at Wolf Creek on August 28th, all depending on when she will be returning to compete for the University of Minnesota ladies’ golf team.  Baustad and Wingnean also earned their way into the field at Wolf Creek with their sparkling performances this afternoon.

Oh, yeah,,,the boys played today too.  Jace Shannon of Forestburg and Kye Fisher of Leduc tied for low gross in the boys’ division, shooting 3-over par 75s.  Both players came from the flight for those boys born in 2004-05 as many of the older boys on hand struggled a bit today and both Shannon and Fisher punched their tickets to Wolf Creek by virtue of their scores today.  Other qualifiers included Jason Ushko (78) from the flight for boys born in 2001-03,  and Tobias Buffam (77) of Calgary’s Valley Ridge GC from the flight for boys born in 2006 & later. Wild Card qualifiers today were Hayden Prins of Goose Hummock and Evan Williams from Silver Springs GCC in Calgary, both firing 81.  (Evan, if you’re reading this, you got away before I could get your contact information for the Tour Championship.  Please email me! – Dunc)

Next stop on Tour is the only 36-hole event on the 2020 Tour schedule at Goose Hummock Golf Resort northeast of Edmonton.  The field is sold out, as has been the case at every Tour stop so far this summer.