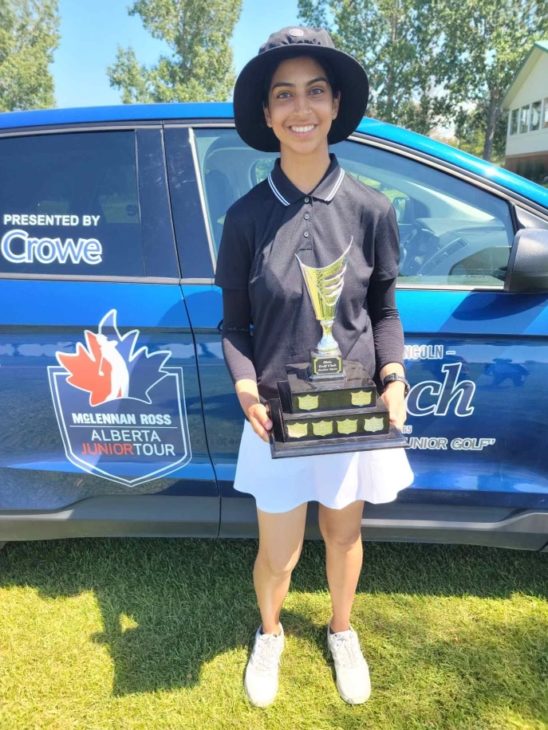 The Olds Golf Club is one of the longest-standing host sites on the McLennan Ross Alberta Junior Tour, having been a regular stop on the Tour since the late 1990s.  I think it is fair to say that we have never seen the golf course in better condition than this morning, when over 70 junior golfers from Edmonton to Lethbridge and several points in between dropped in to compete in today’s Tour stop over what were easily the best-looking fairways and fastest greens we have had all summer on Tour.

What a perfect morning.  Brilliant sunshine and pleasantly warm temperatures greeted the players as they teed off before the heat of the day took over later in the morning. We didn’t have a breath of wind.  The players certainly took advantage of the ideal scoring conditions to post some outstanding scores.  Both Mateo Kern of Canyon Meadows GCC and Wingfield GC’s Sophie Dhaliwal continued their recent outstanding play as both players posted their second Tour wins of the week.  Kern backed up Monday’s winning 1-under par 70 in Canmore with a 2-under 70 today in Olds to capture the overall Junior Boys Low Gross championship and tops in the U17 flight.  Kern had the 60s in his sights as he was 3-under par playing his last hole in the morning shotgun start, but 3-putted for his 70.

We had another score of 70 posted today from young Jayden Arnold of Earl Grey in the Boys U13 division, albeit from a shorter set of tees. But what makes Arnold’s round even more remarkable was that his scorecard included a quadruple bogey 8 on one hole where he not only lost his ball off the tee, but also incurred a 2-shot penalty for hitting a wrong ball on the same hole!  After taking the slight young man’s picture after the round, I would estimate his score was about a pound of body weight per stroke. 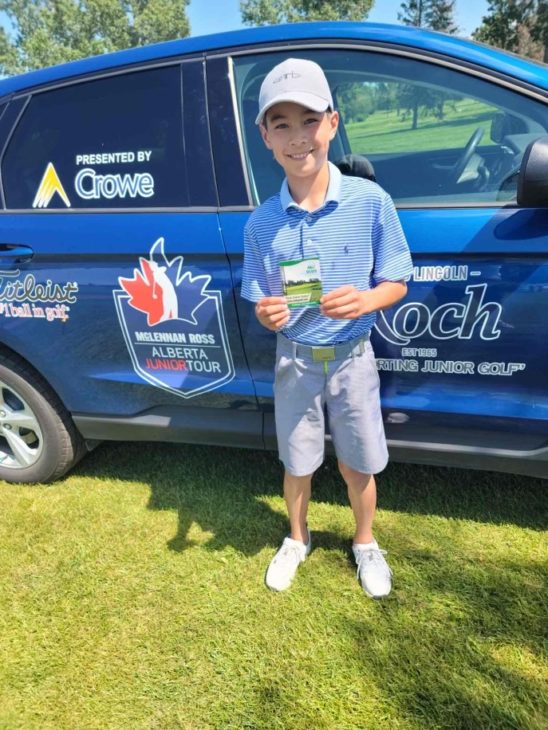 Sophie Dhaliwal continued her recent heater today, besting yesterday’s previous career-best winning score of 72 at Collicutt Siding GC in Crossfield with a 6-birdie, 2-under score of 70 to snag her second Tout title in 24 hours.  If anyone out there has the impression that the McLennan Ross Junior Tour is only for middle handicap youngsters just starting their junior careers, the boys’ winning scores this week have been 70, 73, and 70 and the girls’ winning scores have been 73, 72, and 70.  The Tour provides great opportunities for young players to cut their competitive teeth, but if you want to win, bring some game!

Justine Leon, 12, of Lakeside GC continued her fine play this summer with a 76 to win the U13 division.  Allyah Hull of Willow Park bested the U15 division with her 81, and of course Dhaliwal’s brilliant 70 was top of the table in the U17 age group. 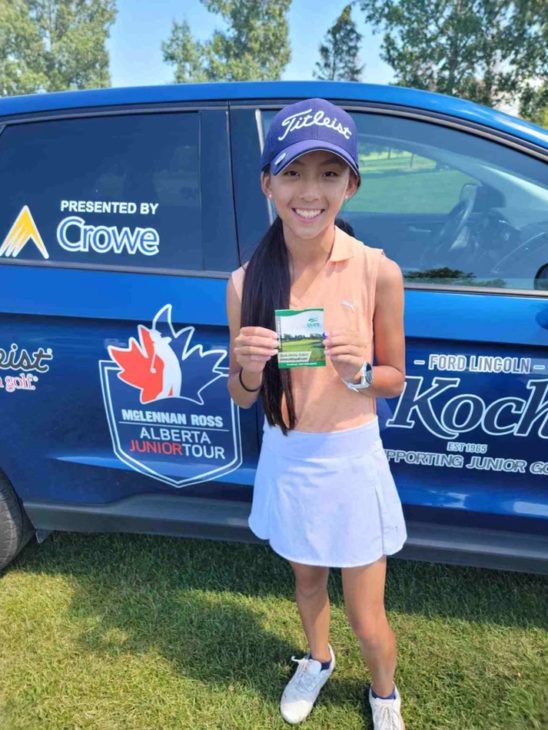 Other age group winners on the boys’ side today included the aforementioned Jayden Arnold’s 70 in the U13 flight, Patrick McLarty of Carnmoney with a fine 1-under 71 in the U15 division, Kern’s 70 in the U17 flight and the host club’s Reid Williamson, 18, taking top money in the U19 age group with an even-par 72.   The boys winners were a combined 5-under par today.  Terrific play by these kids! 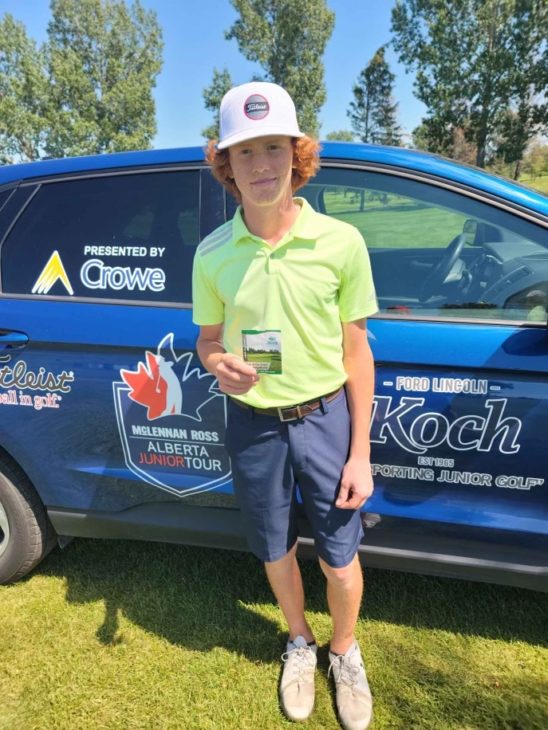 A very busy week on Tour winds up Thursday and Friday with the 36-hole Goose Hummock Jr Open, about 50 km NE of Edmonton at Goose Hummock Golf Resort.  Next week’s events include Nanton on Tuesday, the re-scheduled Ponoka tournament on Wednesday and the ‘major’-feeling Edmonton Petroleum Golf and Country Club’s event on Thursday. 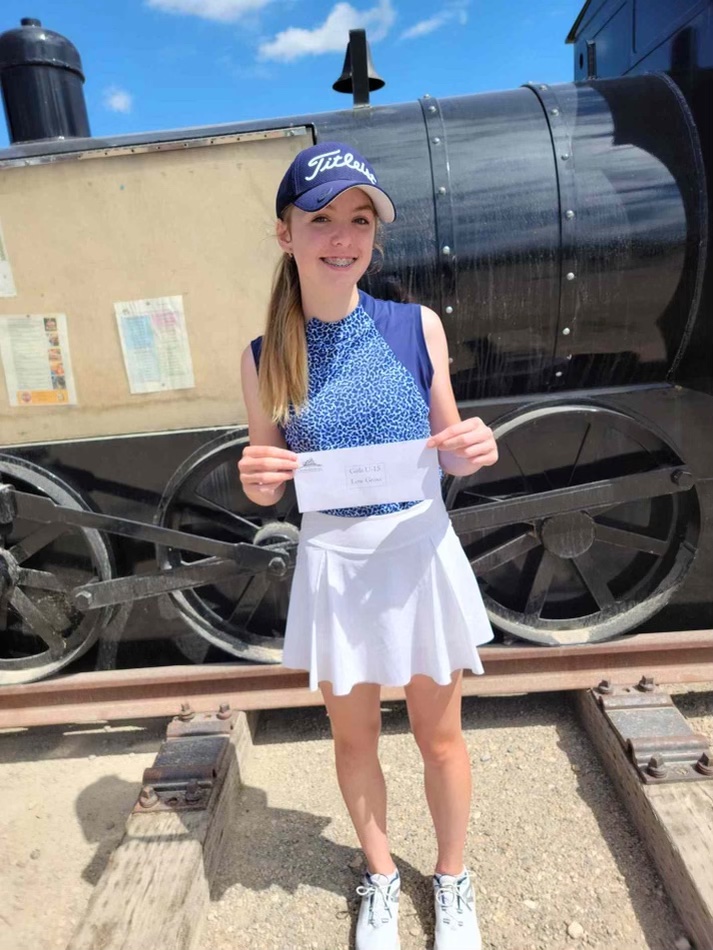