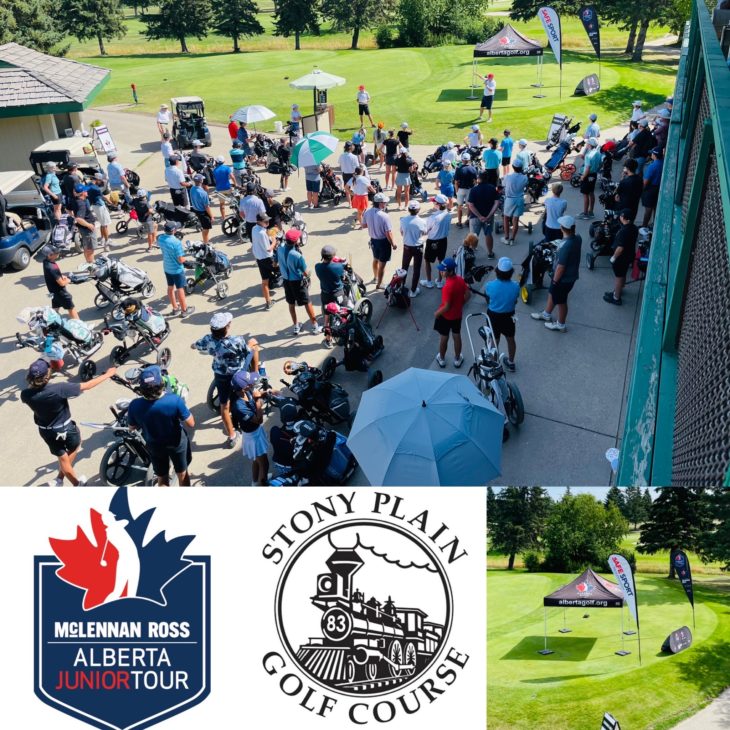 “Youth is wasted on the young…”, or words to that effect,   George Bernard Shaw once said.

Today at the Stony Plain Junior Open, one of the largest fields of the 2022 McLennan Ross Alberta Junior Tour was on hand, featuring 76 juniors from as far away as Fort McMurray, Grande Prairie and Calgary. The age groups were largely populated by junior golfers in the U17 and up age categories. however, when the smoke cleared, the overall girls’ and boys’ champions were aged 12 and 14 respectively.  The term ‘smoke’ of course is only a figure of speech, as the weather this afternoon could not have been better under clear, warm, sunny skies.

Lorenzo Amendola, 14, of the Glendale GCC, fired a steady 1-under par 71 to earn his first McLennan Ross Alberta Junior Tour championship.  Amendola leveraged 4 birdies to offset 3 bogies sprinkled across his card,  edging Saahir Sharma of the Edmonton CC by a single stroke.  Sharma, also competing in the U15 division, out-birdied Amendola 5 to 4, but a disastrous triple-bogey 6 at the 160 yard, par-3 14th hole proved to be his eventual undoing. 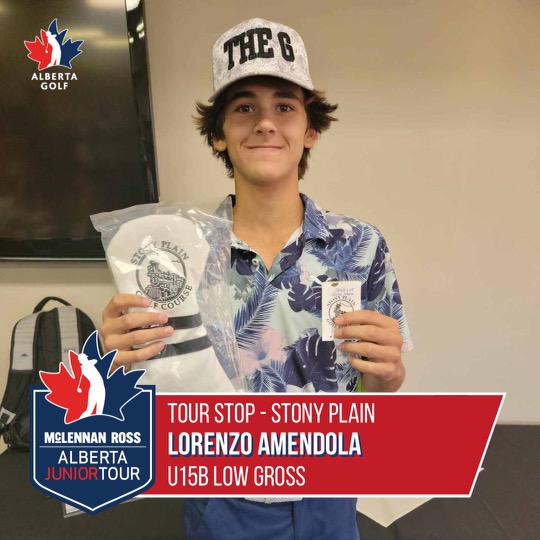 The U13 title today went to Luke Bock of Devon, with a personal-best 88 punctuated by the youngster’s first-ever birdie!!!  And you thought all the ‘highlights’ were reserved for kids shooting par or better?  Far from it!  The bar has now been raised for this kid’s performance and let’s see how he backs this up tomorrow in Westlock.  I think Luke and his dad might be sleeping in the parking lot in Westlock tonight, the kid’s so eager to tee it up again in the morning! LOL 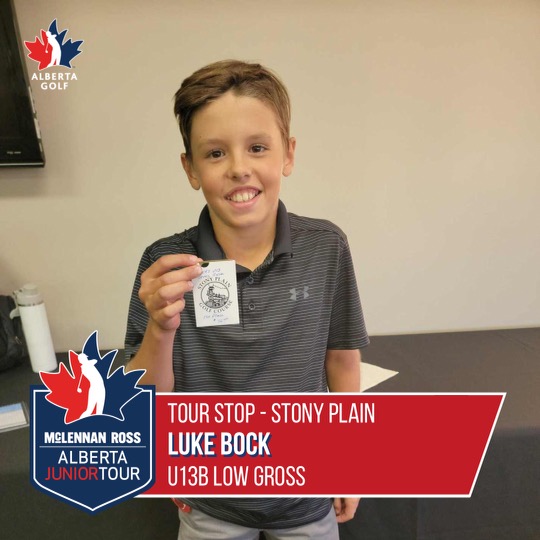 Boys U17 winner this afternoon was Brady Weiss of Stony Plain, who plays out of Cougar Creek Golf Resort.  Weiss’s 75 was three shots clear of Windermere’s Dan Boyle. 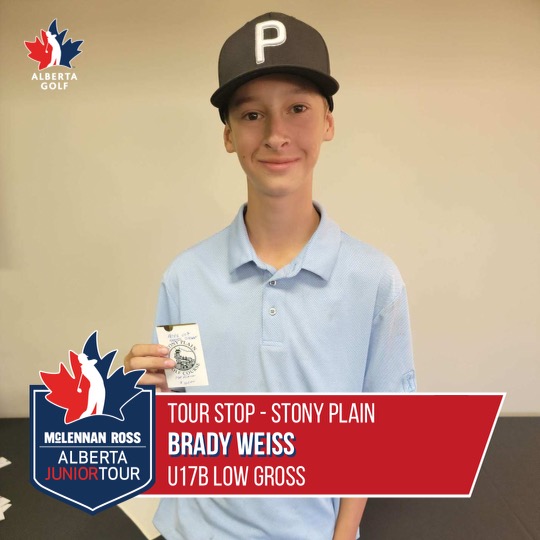 Tops in the boys U19 flight was Lambros Vasilakos of Glendale, whose 73 was not only best in his age group, but third overall as 15 players broke 80 on the beautifully groomed Stony Plain layout. 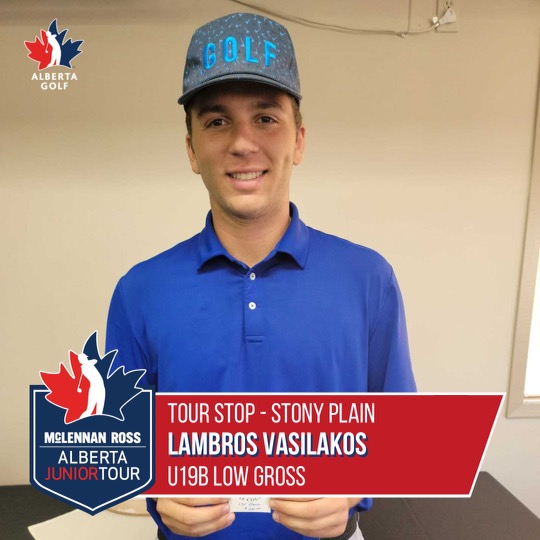 A season-high 17 junior girls were on hand this afternoon, fairly evenly spread across all age groups.  One of the youngest competitors in the field, 12-year-old Justine Leon of Lakeside GC in Chestermere, holed out in 79 strokes, two shots clear of Emma Liu of Windermere GCC, with Camrose’s Nicole Rohr alone in third place overall with an 82.  Liu captured the girls’ U17 age group, while Rohr’s total was tops in the U15 flight.  Anna Kibria of the Edmonton Petroleum GCC fired an 86 to win the U19 division. 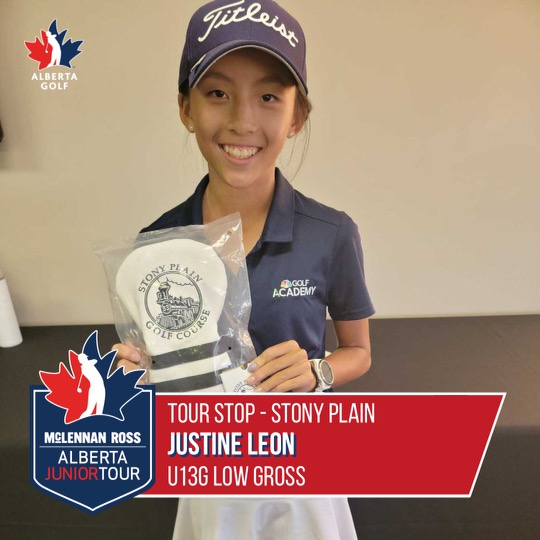 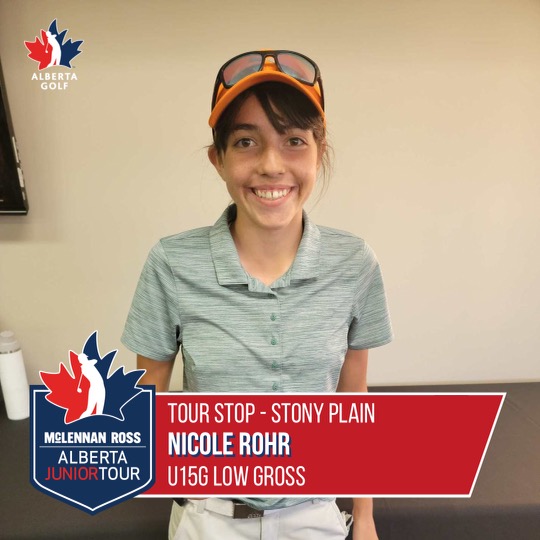 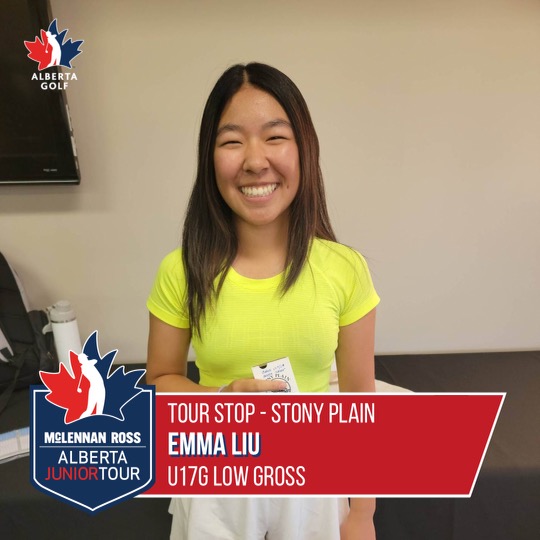 The Tour moves north of Edmonton in the morning to the Westlock Golf Club, as the McLennan Ross Alberta Junior Tour returns to Westlock for the first time since the Tour’s inaugural 1996 season.  Trivia buffs – the 1996 Westlock Junior Boys’ Champion was Danny Sahl of Sherwood Park, keeping himself busy these days on the bag of Corey Conners as Conners pursues the riches of the FedEx Cup playoffs. 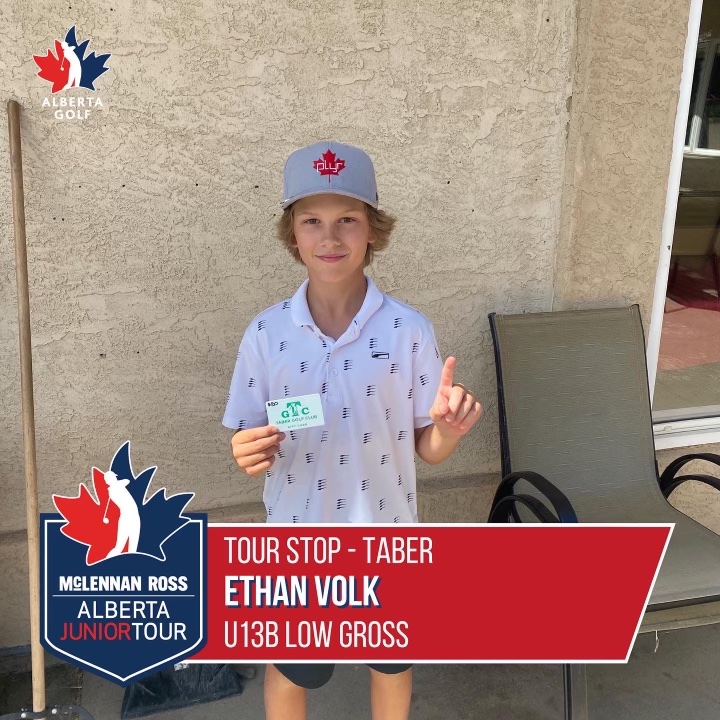