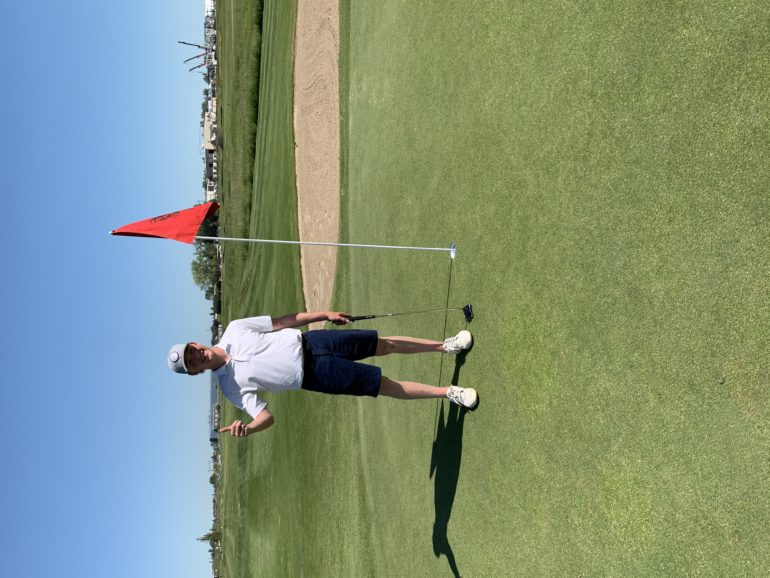 PICTURE ABOVE: Cam Beaton of Canyon Meadows hit his tee shot on the 300-par par-4 10th hole at Collicutt Siding GC to 3 feet and rolled the putt in for an eagle 2.

ROUND RECAP: By Dunc Mills

Summer is finally here and with a vengeance!

A sold out field of junior golfers from as far away as Medicine Hat was on hand this morning at Collicutt Siding GC in Crossfield under cloudless skies and soaring temperatures that reached 31C.

What a contrast for the club from last Friday when it looked more like mid-December after they got pelted with six inches of hail!  Full marks to the grounds crew and General Manager Lyndon King and his team for getting the course in great shape for today’s tournament.  Often in McLennan Ross Alberta Junior Tour events, young players getting experience in tournament play will achieve never before seen levels of personal achievement, and we had two of those instances today.

Kole Keenas, 15, of Strathmore fired a superb 2-under par 70, his lowest score ever in or out of competition.  Keenas sprinkled five birdies on this card offset by three bogies to post the low score of the day.  He needed every shot, too as Kohen Yeske of Valley Ridge came in at 1-under 71.  Both players earned their way into the Tour Championship coming up in a month at Wolf Creek Golf Resort with their excellent play today. 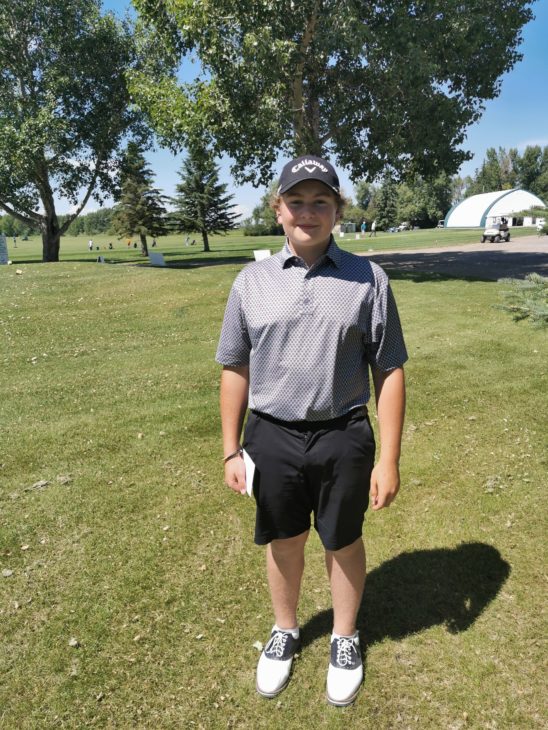 But not all the career-lows are turned in by flight winners or tournament champions.  Grayson Arneson, also 15, of Canyon Meadows GCC was just as thrilled by his 89, the first time the youngster had broken 90 and he was proudly photographing his scorecard to take home as a souvenir from his round today.  His score did earn him Low Net in the flight for boys born in 2004-05.  Congratulations to both Kole and Grayson as they use the Tour to help build their skills and confidence.

Other qualifiers for the Tour Championship today included Tai Robichaud of The Hamptons and The Winston’s Kenan Wipf, who tied for first in the flight for boys born in 2001-03 with their 77s. Wild Card spots today went to Cooper Chalcroft (80) of Country Hills and Cam Beaton (79) of Canyon Meadows GCC, whose round was highlighted by an eagle deuce on the 300-yard par-4 10th hole. Beaton bombed his tee shot to only three feet behind the pin and then drained the putt.  I witnessed the shot greenside and the ball nearly went in the hole for what would have been the first-ever McLennan Ross Alberta Junior Tour ace on a par-4.

We had a nice field of eight junior girls on hand as well today, and these youngsters more than held their own with the quality and the pace of their play.  Kali Yeske, Kohen’s sister, did her part for a sister-brother double win with her 86, six shots clear of Carla van Remmen of Pinebrook.  As both of these girls had previously qualified for Wolf Creek, today’s spot went to third-place finisher Macy Dela Rosa (94) of The Winston.  Junior Coordinator Carson Taylor of The Winston is creating a junior golf monster at the Calgary club with his outstanding program for these kids.  Some days it seems like every second player in Calgary and area Tour events lists his or her home club as The Winston. 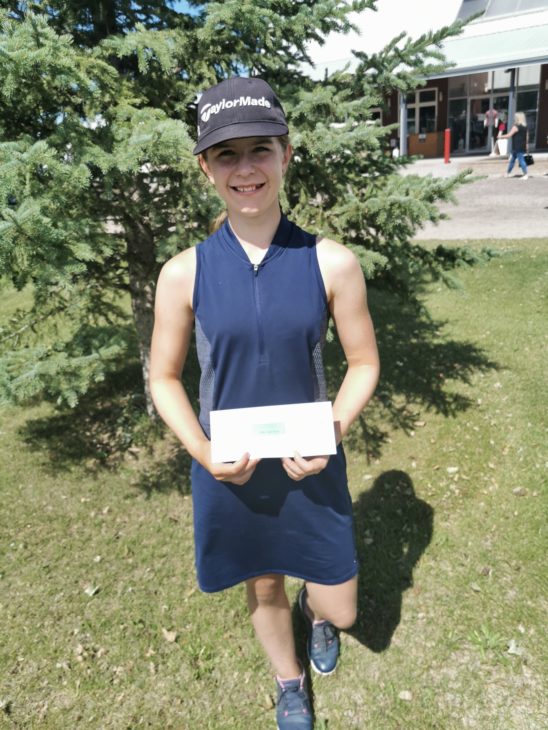 The McLennan Ross Alberta Junior Tour moves north of Red Deer the rest of the week with tomorrow’s sold out event at Montgomery Glen GC in Wetaskiwin followed up by the only 36-hole event on the Tour Thursday and Friday ( also full) at Goose Hummock Golf Resort near Gibbons, just northeast of Edmonton.

The following players are the top 6  and ties in each age group, thereby earning Titleist Order of Merit ranking points. 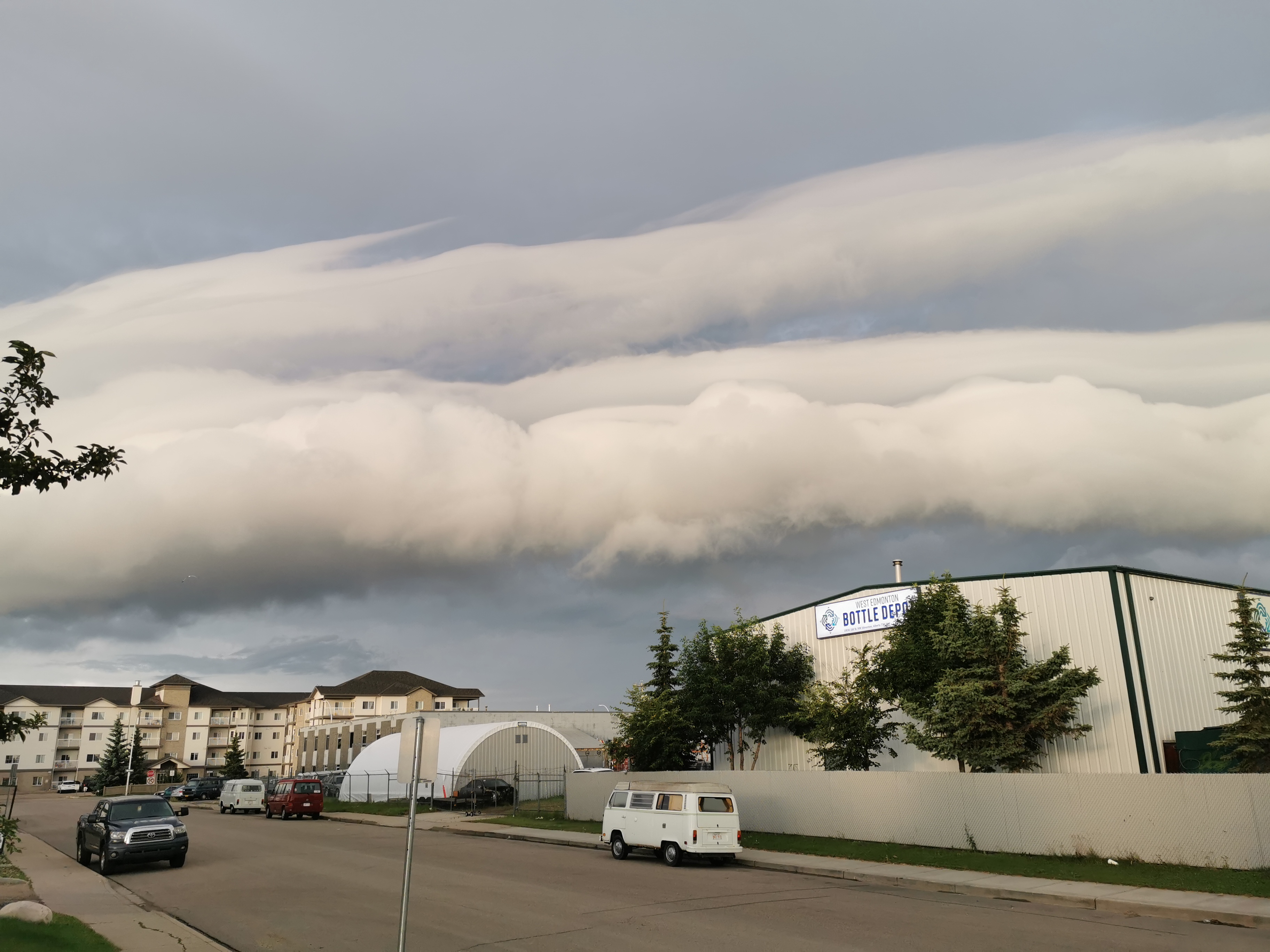